The Ebb and Flow of Stabilization in the Congo

The Ebb and Flow of Stabilization in the Congo 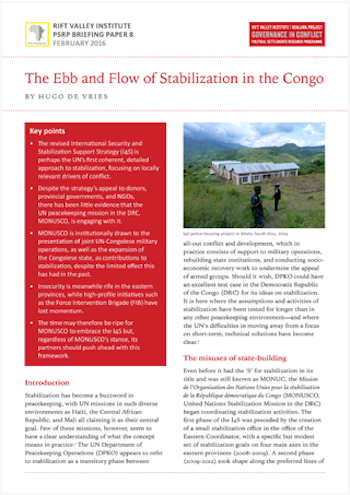 <p>Stabilization has become a buzzword in peacekeeping, with UN missions in such diverse environments as Haiti, the Central African Republic, and Mali all claiming it as their central goal. Few of these missions, however, seem to have a clear understanding of what the concept means in practice. The UN Department of Peacekeeping Operations (DPKO) appears to refer to stabilization as a transitory phase between all-out conflict and development, which in practice consists of support to military operations, rebuilding state institutions, and conducting socio-economic recovery work to undermine the appeal of armed groups. Should it wish, DPKO could have an excellent test case in the Democratic Republic of the Congo (DRC) for its ideas on stabilization. It is here where the assumptions and activities of stabilization have been tested for longer than in any other peacekeeping environment&mdash;and where the UN&rsquo;s difficulties in moving away from a focus on short-term, technical solutions have become clear.</p>

Downloads
The Ebb and Flow of Stabilization in the Congo by Hugo de Vries - RVI PSRP Usalama Project Briefing (2016).pdf