Skip to main content
'You Can Now Get Engaged': Meanings of cassava among the Pojulu of South Sudan|Home

'You Can Now Get Engaged': Meanings of cassava among the Pojulu of South Sudan

'You Can Now Get Engaged': Meanings of cassava among the Pojulu of South Sudan 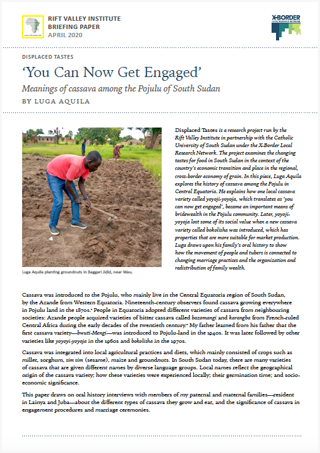 Displaced Tastes is a research project run by the Rift Valley Institute in partnership with the Catholic University of South Sudan under the X-Border Local Research Network. The project examines the changing tastes for food in South Sudan in the context of the country’s economic transition and place in the regional, cross-border economy of grain. In this piece, Luga Aquila explores the history of cassava among the Pojulu in Central Equatoria. He explains how one local cassava variety called yoyoji-yoyoja, which translates as ‘you can now get engaged’, became an important means of bridewealth in the Pojulu community. Later, yoyoji-yoyoja lost some of its social value when a new cassava variety called bokolisha was introduced, which has properties that are more suitable for market production. Luga draws upon his family’s oral history to show how the movement of people and tubers is connected to changing marriage practices and the organization and redistribution of family wealth.

Downloads
You Can Now Get Engaged by Luga Aquila - RVI X-Border Project (2020).pdf