Skip to main content
Women, Conflict and Public Authority in the Congo|Home

Women, Conflict and Public Authority in the Congo

Women, Conflict and Public Authority in the Congo 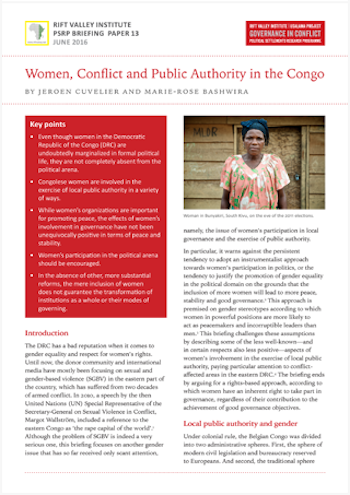 The DRC has a bad reputation when it comes to gender equality and respect for women’s rights. Until now, the donor community and international media have mostly been focusing on sexual and gender-based violence (SGBV) in the eastern part of the country, which has suffered from two decades of armed conflict. In 2010, a speech by the then United Nations (UN) Special Representative of the Secretary-General on Sexual Violence in Conflict, Margot Wallström, included a reference to the eastern Congo as ‘the rape capital of the world’. Although the problem of SGBV is indeed a very serious one, this briefing focuses on another gender issue that has so far received only scant attention, namely, the issue of women’s participation in local governance and the exercise of public authority. In particular, it warns against the persistent tendency to adopt an instrumentalist approach towards women’s participation in politics, or the tendency to justify the promotion of gender equality in the political domain on the grounds that the inclusion of more women will lead to more peace, stability and good governance. This approach is premised on gender stereotypes according to which women in powerful positions are more likely to act as peacemakers and incorruptible leaders than men. This briefing challenges these assumptions  by describing some of the less well-known—and  in certain respects also less positive—aspects of women’s involvement in the exercise of local public authority, paying particular attention to conflict- affected areas in the eastern DRC. The briefing ends by arguing for a rights-based approach, according to which women have an inherent right to take part in governance, regardless of their contribution to the achievement of good governance objectives.