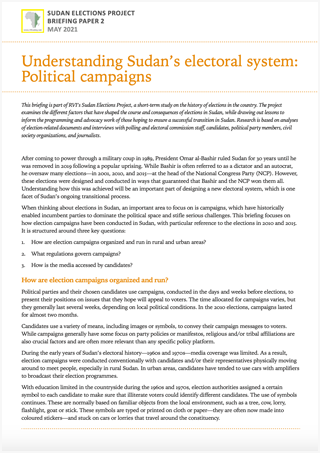 This briefing is part of RVI’s Sudan Elections Project, a short-term study on the history of elections in the country. The project examines the different factors that have shaped the course and consequences of elections in Sudan, while drawing out lessons to inform the programming and advocacy work of those hoping to ensure a successful transition in Sudan. Research is based on analyses of election-related documents and interviews with polling and electoral commission staff, candidates, political party members, civil society organizations, and journalists.

After coming to power through a military coup in 1989, President Omar al-Bashir ruled Sudan for 30 years until he was removed in 2019 following a popular uprising. While Bashir is often referred to as a dictator and an autocrat, he oversaw many elections—in 2001, 2010, and 2015—at the head of the National Congress Party (NCP). However, these elections were designed and conducted in ways that guaranteed that Bashir and the NCP won them all. Understanding how this was achieved will be an important part of designing a new electoral system, which is one facet of Sudan’s ongoing transitional process.

When thinking about elections in Sudan, an important area to focus on is campaigns, which have historically enabled incumbent parties to dominate the political space and stifle serious challenges. This briefing focuses on how election campaigns have been conducted in Sudan, with particular reference to the elections in 2010 and 2015.

Read the briefing in Arabic