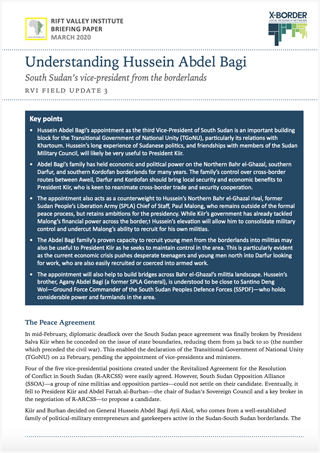 • Hussein Abdel Bagi’s appointment as the third Vice-President of South Sudan is an important building block for the Transitional Government of National Unity (TGoNU), particularly its relations with Khartoum. Hussein’s long experience of Sudanese politics, and friendships with members of the Sudan Military Council, will likely be very useful to President Kiir.

• Abdel Bagi’s family has held economic and political power on the Northern Bahr el-Ghazal, southern Darfur, and southern Kordofan borderlands for many years. The family’s control over cross-border routes between Aweil, Darfur and Kordofan should bring local security and economic benefits to President Kiir, who is keen to reanimate cross-border trade and security cooperation.

• The appointment also acts as a counterweight to Hussein’s Northern Bahr el-Ghazal rival, former Sudan People’s Liberation Army (SPLA) Chief of Staff, Paul Malong, who remains outside of the formal peace process, but retains ambitions for the presidency. While Kiir’s government has already tackled Malong’s financial power across the border, Hussein’s elevation will allow him to consolidate military control and undercut Malong’s ability to recruit for his own militias.

• The Abdel Bagi family’s proven capacity to recruit young men from the borderlands into militias may also be useful to President Kiir as he seeks to maintain control in the area. This is particularly evident as the current economic crisis pushes desperate teenagers and young men north into Darfur looking for work, who are also easily recruited or coerced into armed work.