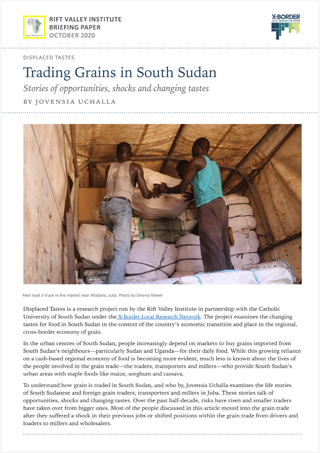 Displaced Tastes is a research project run by the Rift Valley Institute in partnership with the Catholic University of South Sudan under the X-Border Local Research Network. The project examines the changing tastes for food in South Sudan in the context of the country’s economic transition and place in the regional, cross-border economy of grain.

In the urban centres of South Sudan, people increasingly depend on markets to buy grains imported from South Sudan’s neighbours—particularly Sudan and Uganda—for their daily food. While this growing reliance on a cash-based regional economy of food is becoming more evident, much less is known about the lives of the people involved in the grain trade—the traders, transporters and millers—who provide South Sudan’s urban areas with staple foods like maize, sorghum and cassava.

To understand how grain is traded in South Sudan, and who by, Jovensia Uchalla examines the life stories of South Sudanese and foreign grain traders, transporters and millers in Juba. These stories talk of opportunities, shocks and changing tastes. Over the past half-decade, risks have risen and smaller traders have taken over from bigger ones. Most of the people discussed in this article moved into the grain trade after they suffered a shock in their previous jobs or shifted positions within the grain trade from drivers and loaders to millers and wholesalers.