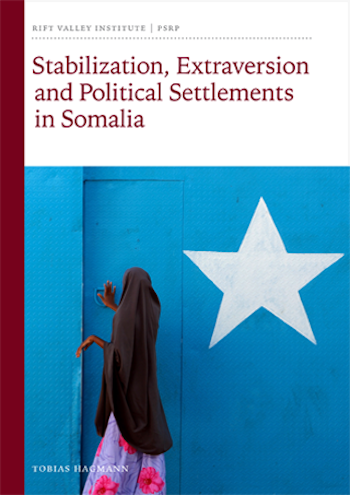 'This study uses the concept of extraversion to show how different Somali actors—who do not share the statebuilding vision of international donors— have successfully used externally driven peacebuilding and statebuilding projects to their advantage. Moving away from established narratives on the tribulations of such projects, this approach not only transfers agency back to Somalis in internationally engineered interventions, but also demonstrates the need to rethink statebuilding strategies. In doing so, it provides fresh insights to policymakers and academics working on Somalia.'
ASNAKE KEFALE, DEPARTMENT OF POLITICAL SCIENCE AND INTERNATIONAL RELATIONS, ADDIS ABABA UNIVERSITY

'In critically exploring 25 years of internationalized statebuilding in south- central Somalia with Bayart’s concept of extraversion, this report brings a thought-provoking perspective on how and why statebuilding efforts have repeatedly failed. It also establishes a much needed link between Somali political processes and a broader literature on the state in Africa.'
FADUMA ABUKAR MURSAL, MAX PLANCK INSTITUTE FOR SOCIAL ANTHROPOLOGY, HALLE/SAALE

Why is Somalia still far from achieving a lasting political settlement, after decades of international military, diplomatic and aid interventions to stabilize the war- torn country? This study argues that international aid and the interplay between local and foreign elites in policies and practices has frequently undermined state-building efforts in Somalia. Rather than assuming that foreign actors are external to the evolving conflict dynamics of warlord economies, militant Islamism or political settlements, Stabilization, Extraversion and Political Settlements in Somalia concludes that they should instead be understood as integral to them. Consequently, the power and interests of both Somali and international actors must be considered in order to understand the shortcomings of stabilization policies.