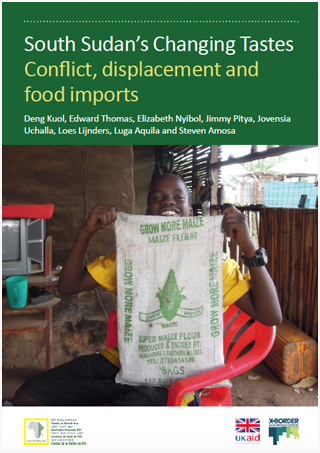 South Sudan’s long wars have forced millions of people to leave their own homes, farms and pastures and move to unfamiliar new areas of the countryside, to refugee camps and cities. In the process, they have changed the way they get and eat basic foods. Many remember the tastes of the old days: flavourful, satisfying sorghums, millets and other staples like cassava, which are grown from local seeds at home—South Sudan is fabulously biodiverse, and has dozens of unclassified local seed varieties. Now, many eat blander grains like maize, purchased at markets. The displacement of millions of rural producers has made South Sudan one of the hungriest places on earth—and caused a chronic cereal deficit. Neighbouring countries with grain surpluses now supply a huge proportion of the grain calories consumed in South Sudan. South Sudan’s Changing Tastes: Conflict, displacement and food imports explains how South Sudan’s reliance on regional grain markets is shaping its international relations. But it also looks in detail at everyday life: how homegrown grains give South Sudan’s diverse cultures flavours, memories, meanings and rituals.

This report is a product of the X-Border Local Research Network, a component of DFID’s Cross- Border Conflict—Evidence, Policy and Trends (XCEPT) programme, funded by UKaid from the UK government. The programme carries out research work to better understand the causes and impacts of conflict in border areas and their international dimensions. It supports more effective policymaking and development programming and builds the skills of local partners.