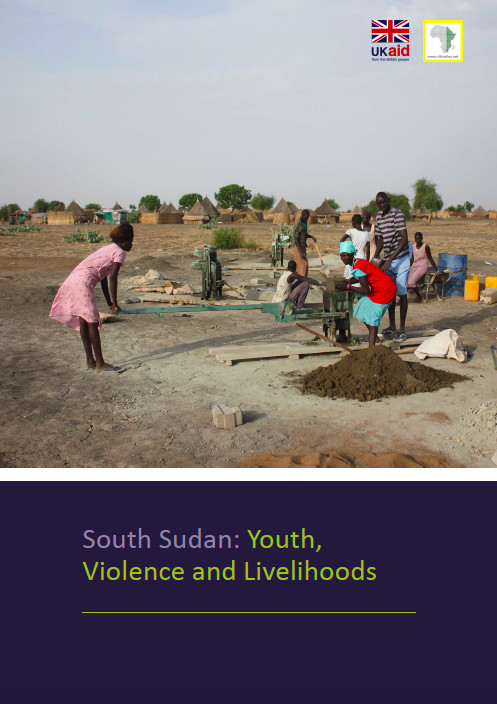 This report explains the realities of life for South Sudan’s youth population, the majority of whom are living in conditions of extreme economic precarity. Young people face enormous challenges in trying to survive and progress in their lives. This is happening in the context of overarching neglect of the citizenry by the government, corruption, ethnic based violent conflict and competition for control of the economy and natural resources.

After independence in 2011, and particularly since 2012, when the new Government of South Sudan (GoSS) shut down its oil fields in a fee dispute with Sudan, the economy went into structural collapse. The outbreak of violent ethnically based conflict in December 2013 further deepened this and exacerbated existing regional, gender and class inequalities. It also resulted in the massive expansion of donor funded humanitarian assistance that still struggles to meet the basic nutrition needs of more than half of South Sudan’s population and provides minimal employment opportunities for its youth.

Most young women and men now rely on informal sector trade, agricultural production and market and food service work to earn money to live. But this precarious economic picture means that young people are particularly at risk of voluntary or forced recruitment into government militias, armed opposition groups or the national security sector forces. These options, at best, provide only poverty-level income.

South Sudan’s youth do not consider livelihood support interventions by international actors to have contributed to any significant and sustainable impact. Instead, they consider the international approach to have predominantly focused on individual entrepreneurship, market engagement and small business support that people are already involved with, but which face the challenging conditions described above.

This research, which was led by a team of young Southern Sudanese who have first-hand experience of these challenges, concludes that there remains an urgent need to better understand how genuinely sustainable livelihood interventions might work, and what international support for nation building and economic recovery might look like. These strategies would need to challenge some of the recurrent, abusive economic relationships, as well as the exclusive and elitist character of international assistance itself.