Putting everyday police life at the centre of reform in Bukavu

Putting everyday police life at the centre of reform in Bukavu 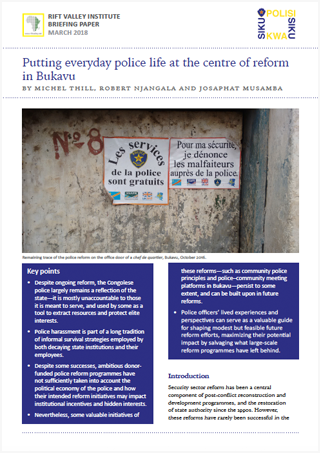 Security sector reform has been a central component of post-conflict reconstruction and development programmes, and the restoration of state authority since the 1990s. However, these reforms have rarely been successful in the long run. In the DRC, police reform has been a staple of statebuilding and governance strengthening efforts. Despite some reform successes, however, the Congolese National Police largely remains a reflection of the state. It is mostly unaccountable to those it is meant to serve, and used as a tool by some to extract resources and protect elite interests.

As a key state institution, sustainable reform of the police is impossible without a considerable overhaul of the larger governance framework of which it is part. While acknowledging this major systemic challenge, this briefing suggests that there may nevertheless be some more modest, yet impactful, gains to be made through police reform. By focusing on the everyday work and life of police personnel, future reforms could contribute to changing police behaviour on the streets and in police stations, at the interface between the police and the population where it may arguably matter most.

Based on seven months of qualitative research on the PNC conducted in Bukavu between 2016 and 2017, this briefing argues that targeted police reforms, informed and driven by local actors, can affect change, and often in a more sustainable—and financially viable—fashion than past large-scale donor-driven reform support programmes