Peace is the Name of Our Cattle-Camp

Peace is the Name of Our Cattle-Camp 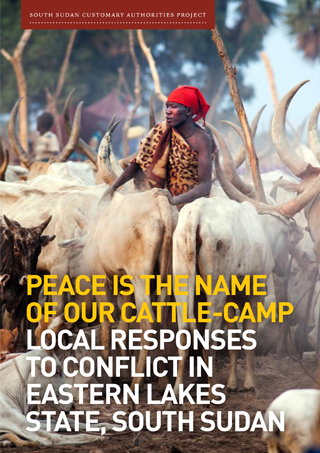 Following the 2005 Comprehensive Peace Agreement (CPA) and the subsequent independence of South Sudan in 2011, many agro-pastoralist and pastoralist areas of the country have experienced an upsurge of livestock raiding, counter raiding and cycles of revenge killing. Eastern Lakes State, in contrast to its neighbor, Western Lakes State, is an exception. Since 2011, there has been a significant reduction in violent conflict between communities in the state. Peace is the Name of Our Cattle-Camp considers the communal resources brought to bear on conflict resolution in Eastern Lakes State, beginning shortly before the CPA, and on local understandings of this process. The interplay of factors on the ground, and the responses to them by community leaders and political figures, offers an approach to conflict reduction based on the changing moral and political economy of agro-pastoral communities in post-independence South Sudan.

Downloads
Peace is the Name of Our Cattle-Camp by John Ryle and Machot Amuom - RVI SSCA Project (2018).pdf