Making Order Out of Disorder: Customary authority in South Sudan

Making Order Out of Disorder: Customary authority in South Sudan 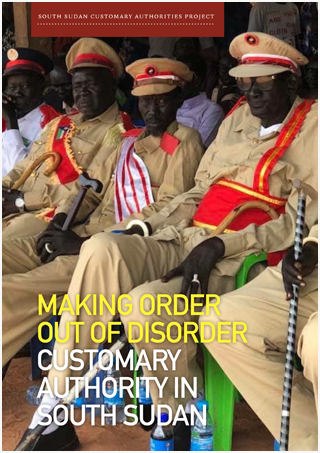 South Sudan’s customary authorities play an important role in local government, justice, and as intermediaries or brokers between local communities and the government. While significant attention was paid to the role of customary authorities in South Sudan’s statebuilding project prior to the country’s secession in 2011, the start of South Sudan’s civil war in December 2013 reoriented the focus towards humanitarian activities. Making Order Out of Disorder, which synthesizes and expands on the reports from RVI’s South Sudan Customary Authorities project, refocuses attention back to their position and importance in the country today.

The report considers the hybrid role of customary authorities in governance, the part they play in defining customs, and the evolving nature of chiefship within a rapidly changing and urbanizing society. It concludes that chiefs, and other customary authorities, have retained a meaningful role within South Sudan and do not constitute a static system of governance or affiliation. Given this, there is real value in including them within peacebuilding and other discussions about the future of the country.