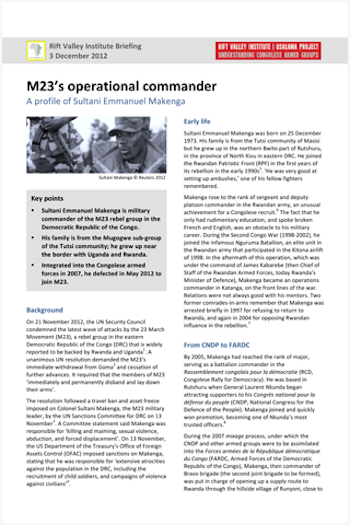 This Usalama Project briefing presents a concise biography of the M23's senior commander, Sultani Makenga, in the eastern Democratic Republic of the Congo (DRC). It describes his rise through the ranks, his earlier membership of the Rassemblement congolais pour la démocratie (RCD) and the Congrès national pour la défense du people (CNDP), and his relationship with the current Rwandan Defence Minister, James Kabarebe.

Read the full briefing below or download as a PDF.

Jason Stearns is Director of Studies of the RVI Great Lakes Course. He is author of Dancing in the Glory of Monsters: the collapse of the Congo and the great war of Africa (2011). He is the former Coordinator of the UN Group of Experts on the DRC.

On 21 November 2012, the UN Security Council condemned the latest wave of attacks by the 23 March Movement (M23), a rebel group in the eastern Democratic Republic of the Congo (DRC) that is widely reported to be backed by Rwanda and Uganda.[1] A unanimous UN resolution demanded the M23’s immediate withdrawal from Goma and cessation of further advances.[2] It required that the members of M23 ‘immediately and permanently disband and lay down their arms’.

The resolution followed a travel ban and asset freeze imposed on Colonel Sultani Makenga, the M23 military leader, by the UN Sanctions Committee for the DRC on 13 November.[3] A Committee statement said Makenga was responsible for ‘killing and maiming, sexual violence, abduction, and forced displacement’. On 13 November, the US Department of the Treasury's Office of Foreign Assets Control (OFAC) imposed sanctions on Makenga, stating that he was responsible for ‘extensive atrocities against the population in the DRC, including the recruitment of child soldiers, and campaigns of violence against civilians’.[4]

Sultani Emmanuel Makenga was born on 25 December 1973. His family is from the Tutsi community of Masisi but he grew up in the northern Bwito part of Rutshuru, in the province of North Kivu in eastern DRC. He joined the Rwandan Patriotic Front (RPF) in the first years of its rebellion in the early 1990s. ‘He was very good at setting up ambushes,’ one of his fellow fighters remembered.[5]

Makenga rose to the rank of sergeant and deputy platoon commander in the Rwandan army, an unusual achievement for a Congolese recruit.[6] The fact that he only had rudimentary education, and spoke broken French and English, was an obstacle to his military career. During the Second Congo War (1998-2002), he joined the infamous Nguruma Batallion, an elite unit in the Rwandan army that participated in the Kitona airlift of 1998. In the aftermath of this operation, which was under the command of James Kabarebe (then Chief of Staff of the Rwandan Armed Forces, today Rwanda’s Minister of Defence), Makenga became an operations commander in Katanga, on the front lines of the war. Relations were not always good with his mentors. Two former comrades-in-arms remember that Makenga was arrested briefly in 1997 for refusing to return to Rwanda, and again in 2004 for opposing Rwandan influence in the rebellion.[7]

From CNDP to FARDC

By 2005, Makenga had reached the rank of major, serving as a battalion commander in the Rassemblement congolais pour la démocratie (RCD, Congolese Rally for Democracy). He was based in Rutshuru when General Laurent Nkunda began attracting supporters to his Congrès national pour la défense du peuple (CNDP, National Congress for the Defence of the People). Makenga joined and quickly won promotion, becoming one of Nkunda’s most trusted officers.[8]

In the 2007 mixage process, the CNDP and other armed groups were to be assimilated into the Forces armées de la République démocratique du Congo (FARDC, Armed Forces of the Democratic Republic of the Congo). Makenga, then commander of Bravo brigade (the second joint brigade to be formed), was put in charge of opening up a supply route to Rwanda through the hillside village of Runyoni, close to the Rwandan border. Makenga’s troops responded brutally to an attempt on his life in Buramba, a town close the Ugandan border.[9] He was vigorously defended in the media by Nkunda, but an internal UN investigation concluded:

As commander of the Mixed Bravo Brigade in 2007 he may bear command responsibility over the so-called second Buramba massacre of 9-10 March 2007 when FARDC troops from the 2nd Battalion of the recently mixed Bravo Brigade under the direct command of Lt. Col. Innocent Nzamulinda aka Zimulinda (and under the overall command of Col. Sultani Makenga) arbitrarily executed at least 15 people.

When mixage broke down, Makenga became commander of the strategic Rutshuru zone for the CNDP, controlling the Bunagana border crossing and access to Rwanda through the Virunga National Park. In 2008, following the Goma peace conference that brought together the Congolese government, local civil society and various armed groups, he was promoted to deputy chief of staff of the CNDP, and Nkunda moved his headquarters next to Makenga’s in Rutshuru.

When Nkunda was arrested by the Rwandan leadership in January 2009––as part of a secret agreement between the Congo and Rwanda––Makenga briefly considered rebelling against the latter before he was dissuaded by his colleagues.[10] He was one of 11 CNDP officers to sign an agreement ending hostilities with the DRC government on 16 January 2009.

Following the CNDP’s integration into the Congolese army, Makenga was put in charge of the offensive against the Forces démocratiques pour la libération du Rwanda (FDLR, Democratic Forces for the Liberation of Rwanda) along the axis between Masisi and Walikale. Later, he was deployed to South Kivu, where he became Deputy Commander of operations. Within the ex-CNDP, he was seen as an Nkunda loyalist. Many of Nkunda’s followers flocked to South Kivu, where they were given operational positions.

Nkunda’s arrest, and the appointment of General Bosco Ntaganda as his replacement, created two wings within the CNDP, the ‘Kimbelemble’ (forward-forward) loyal to Nkunda, and the ‘Kifuafua’ (those with their chest ahead) close to Ntaganda.

Ntaganda, who was indicted by the International Criminal Court in 2006, was also trained in the Rwandan army, but spent much of his military career in Ituri district. After the integration of the CNDP into the Congolese army, Ntaganda became deputy commander of military operations in the eastern Congo (code-named Amani Leo, meaning Peace Today). In mid-2011, Ntaganda paid a visit to Makenga in Bukavu in an effort to paper over tensions between the two.

From FARDC to M23

In May 2012, Makenga defected from the Congolese army and joined the M23 rebellion, being elevated to the rank of general. Shortly afterward, he was named commander of M23. While neither Ntaganda or Nkunda––now under house arrest in Rwanda––have an official role in the M23, the divides within the M23 persist. In late November 2012, Baudouin Ngaruye, an Ntaganda loyalist, was also promoted to the rank of general and deputy commander of the M23, a move perceived by Makenga as competition[11].

Makenga’s reputation is of a taciturn but straight-shooting commander who commands respect from his soldiers. Rumours have surrounded his health for many years. He was visibly unwell during the M23 advance in 2012 and speculation has intensified since the M23 took control of Goma.

[8] Usalama Project Interviewee #133 in Goma, 13 August 2012; many other interviews with ex-CNDP soldiers confirmed this.