Skip to main content
'It's not all about the land'|Home

'It's not all about the land'

'It's not all about the land' 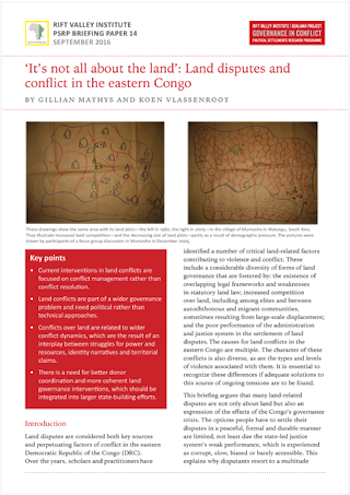 Land disputes are considered both key sources and perpetuating factors of conflict in the eastern Democratic Republic of the Congo (DRC). Over the years, scholars and practitioners have identified a number of critical land-related factors contributing to violence and conflict. These include a considerable diversity of forms of land governance that are fostered by: the existence of overlapping legal frameworks and weaknesses in statutory land law; increased competition over land, including among elites and between autochthonous and migrant communities, sometimes resulting from large-scale displacement; and the poor performance of the administration and justice system in the settlement of land disputes.

This briefing argues that many land-related disputes are not only about land but also an expression of the effects of the Congo’s governance crisis. The options people have to settle their disputes in a peaceful, formal and durable manner are limited, not least due the state-led justice system’s weak performance, which is experienced as corrupt, slow, biased or barely accessible. This explains why disputants resort to a multitude        of alternative conflict resolution, mediation and arbitration mechanisms, involving a wide range of state and non-state actors and structures, some of which have been introduced with the support of external actors.

Downloads
It's not all about the land by Gillian Mathys and Koen Vlassenroot - RVI PSRP Usalama Project Briefing (2016).pdf