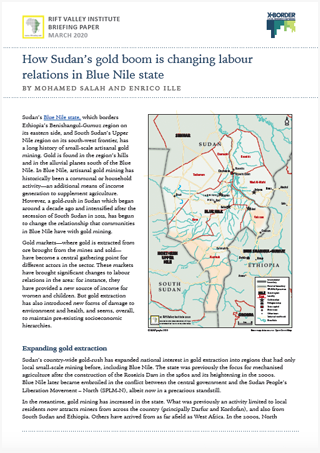 Sudan’s Blue Nile state, which borders Ethiopia’s Benishangul-Gumuz region on its eastern side, and South Sudan’s Upper Nile region on its south-west frontier, has a long history of small-scale artisanal gold mining. Gold is found in the region’s hills and in the alluvial planes south of the Blue Nile. In Blue Nile, artisanal gold mining has historically been a communal or household activity—an additional means of income generation to supplement agriculture. However, a gold-rush in Sudan which began around a decade ago and intensified after the secession of South Sudan in 2011, has begun to change the relationship that communities in Blue Nile have with gold mining.

Gold markets—where gold is extracted from ore brought from the mines and sold— have become a central gathering point for different actors in the sector. These markets have brought significant changes to labour relations in the area: for instance, they have provided a new source of income for women and children. But gold extraction has also introduced new forms of damage to environment and health, and seems, overall, to maintain pre-existing socioeconomic hierarchies.