Skip to main content
Grains As Life: The value of sorghum and millet amongst the Abyei Dinka|Home

Grains As Life: The value of sorghum and millet amongst the Abyei Dinka

Grains As Life: The value of sorghum and millet amongst the Abyei Dinka 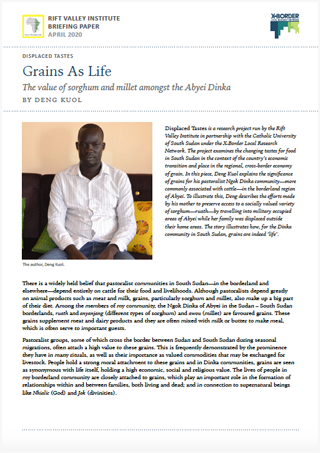 Displaced Tastes is a research project run by the Rift Valley Institute in partnership with the Catholic University of South Sudan under the X-Border Local Research Network. The project examines the changing tastes for food in South Sudan in the context of the country’s economic transition and place in the regional, cross-border economy of grain. In this piece, Deng Kuol explains the significance of grains for his pastoralist Ngok Dinka community—more commonly associated with cattle—in the borderland region of Abyei. To illustrate this, Deng describes the efforts made by his mother to preserve access to a socially valued variety of sorghum—ruath—by travelling into military occupied areas of Abyei while her family was displaced outside their home areas. The story illustrates how, for the Dinka community in South Sudan, grains are indeed ‘life’.