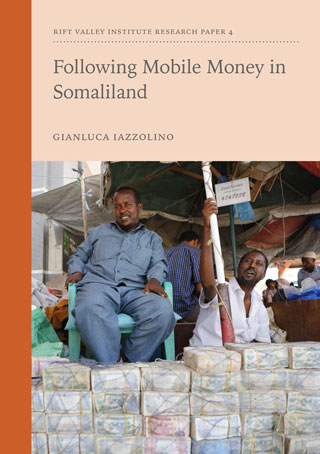 ‘This study provides an interesting and unusual insight into the state-building process in Somaliland. Taking Zaad—our everyday companion here in Somaliland—Iazzolino explores the intricate nature of private and public sector relations. Vividly mapping the landscape of the mobile money transfer system, he identifies the importance of trust as its foundation, and the role that banking, financial institutions and technology have played in the making of Somaliland. This report is a recommended reading for policy makers and academics alike.’
ABDI ZENEBE, IPCS, UNIVERSITY OF HARGEYSA, SOMALILAND

Zaad, Somaliland’s first mobile money platform, was launched in 2009 and has rapidly become a feature of a financial landscape hitherto dominated by Somali remittance companies. This report charts the distribution of mobile money across the financial landscape of Somaliland. It examines the way the Zaad service is reshaping livelihoods and business practices, as well as implications of its popularity for the relationship between state and non-state actors, and the effect this might have on Somaliland’s political and financial institutions. It argues that the narrative of the role that mobile systems can have in supporting financial inclusion runs the risk of obscuring complex political and economic dynamics, especially in the context of Somaliland’s state-building process. The study suggests that the popularity of Zaad is in part due to the specific context in which it operates as well as the business model and outreach strategy of its parent company Telesom. Fundamentally, in the absence of international banks, Zaad meets a widespread demand to help people cope with a volatile economic situation.

The author has also made a short film on the topic, which is viewable below.