Federalism in the history of South Sudanese political thought

Federalism in the history of South Sudanese political thought 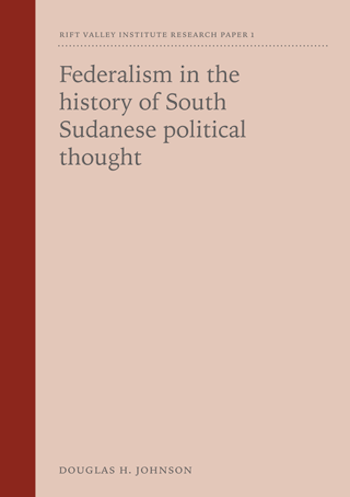 'In South Sudan there is no system of governance so popular—yet so little understood—as the federal system. Historically the demand for federation with North Sudan was seen as the way to keep Sudan united, and the absence of such a system was held up as one of the causes of the long wars between North and South. Now federalism is proposed as a panacea for problems of governance in independent South Sudan. But is it? And is the system any better understood now than in the 1950s? Douglas Johnson’s paper—first delivered in a packed lecture hall at Juba University—is required reading for those who wish to see orderly discussion on the various federal systems before we rush into something which could lead to an even bigger problem.'
JACOB J. AKOL, GURTONG TRUST

Federalism has once again become a central issue in political debate in South Sudan. The idea has a long pedigree in the country’s political history, signifying different things at different times. In Federalism in the history of South Sudanese political thought, Douglas Johnson explains how the idea evolved in the colonial era as part of the southern search for political identity. His paper discusses attitudes towards federalism and the ways it was presented from before Sudan’s independence in 1956, up to South Sudan’s independence today.