Skip to main content
From Dust to Dollar: Gold mining and trade in the Sudan-Ethiopia borderland|Home

From Dust to Dollar: Gold mining and trade in the Sudan-Ethiopia borderland

From Dust to Dollar: Gold mining and trade in the Sudan-Ethiopia borderland 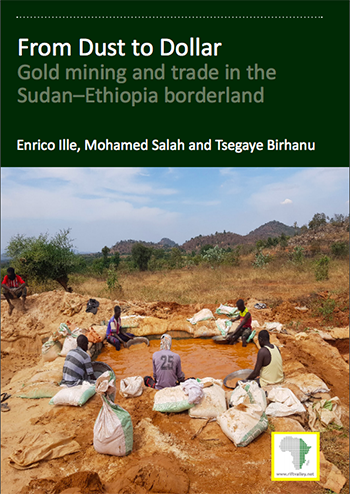 From Dust to Dollar focuses on the borderland region between Sudan and Ethiopia, using gold-mining and trade to examine transnational flows of people and commodities across its semi-permeable frontier. Gold mining has shifted from being part of a long-term, family- and community-based livelihood strategy to a short-term entrepreneurial pursuit. Mining is increasingly dominated by the private sector, with the military now a leading player in Sudan.

Attempts by the governments of Sudan and Ethiopia to increase control over the circulation of artisanal gold in their borderland regions have largely failed. Instead, cross-border trade has increased, away from official pathways.

Centralized decision-making under authoritarian regimes has generally prioritized controlling the flow of resources, rather than respecting local distributive logic and supply needs. This has resulted in the circumvention of poli­cies formulated by central governments on cross-border trade on both sides of the border.

Border demarcation has been the primary tool promoted to tackle problems, but it has generally been ineffective and ultimately aborted. Insecurity along the border has been addressed via militarization. These strategies have done little to address the fundamental issue that the border is the result of a colonial geopolitical deal between Britain and the Abyssinian Empire that ignored existing social relations and land property.

While the Blue Nile–Benishangul-Gumuz borderland is not free from conflict, it provides an example of relatively stable cross-border relations that have been limited by regime-instigated civil wars and border restrictions imposed by central governments.

This report is a product of the X-Border Local Research Network, a component of the FCDO’s Cross-Border Conflict Evidence, Policy and Trends (XCEPT) programme, funded by UK aid from the UK government. XCEPT brings together leading experts to examine conflict-affected borderlands, how conflicts connect across borders, and the factors that shape violent and peaceful behaviour.