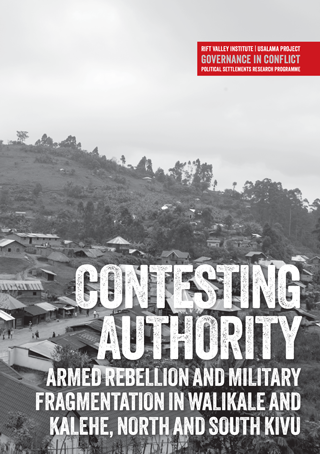 For more than 20 years, Kalehe and Walikale, two territories connecting the provinces of North and South Kivu, have been characterized by a proliferation of armed groups. The first of these groups emerged during the Masisi war in North Kivu, which pitched autochthonous and migrant communities against each other and affected ethnic cohabitation in Kalehe and Walikale. During the Congolese wars, these armed groups evolved into one of the leading Mai-Mai groups, which occupied vast parts of both territories and installed its own structures of dominance. The start of the peace process in 2003 did not put an end to the local process of militarization. While in Walikale part of the former Mai-Mai movement transformed into the Mai-Mai Kifuafua, the successful campaigns of the Raia Mutomboki against the Forces démocratiques de libération du Rwanda (FDLR, Democratic Forces for the Liberation of Rwanda) in Shabunda eventually also spread to Kalehe and Walikale. Although the FDLR has been largely ousted from both territories, the Raia Mutomboki continues to be a key player in the local political and military landscape and has become deeply involved in different domains of public life.

This report analyses the involvement of these armed groups in public life in the territories of Kalehe and Walikale. The current political and military landscape in these territories, defined by the presence of armed groups and the consequent fragmentation of local authority, is mainly caused by unresolved tensions between and within communities over territory, authority and resources; the lack of capacity of the Congo’s state services to provide protection; and the limited success of reintegration efforts. The report explores how these armed groups are embedded in local communities, how they are connected to local power struggles and how they are involved in the exercise of local authority, including in the fields of security, dispute resolution and revenue generation. Armed groups are able to mobilize popular support by evoking two issues of existential importance to local communities—marginalization and security. While the former revolves around the historical marginalization of local communities in politics and governance, the latter frames local communities as in need of protection. These issues give meaning to armed groups’ bids for local authority and legitimize their engagement in a wide range of governmental practices normally ascribed to the state, such as taxation and the provision of justice and security.

Armed groups have evolved into dominant power brokers, which are deeply involved with ruling territory, people and resources. They have become part and parcel of local and sometimes national power dynamics, have colluded with local and national political and customary leaders, and have developed different techniques and strategies to impose or sustain their authority. The end result is further militarization and fragmentation of public space and social interactions.