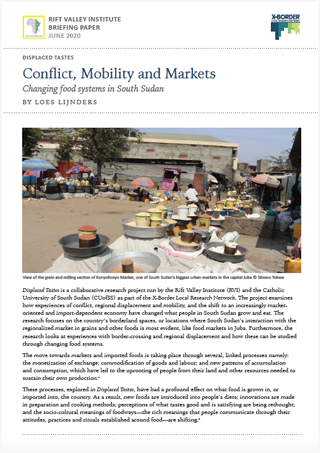 Displaced Tastes is a collaborative research project run by the Rift Valley Institute (RVI) and the Catholic University of South Sudan (CUofSS) as part of the X-Border Local Research Network. The project examines how experiences of conflict, regional displacement and mobility, and the shift to an increasingly market-oriented and import-dependent economy have changed what people in South Sudan grow and eat. The research focuses on the country’s borderland spaces, or locations where South Sudan’s interaction with the regionalized market in grains and other foods is most evident, like food markets in Juba. Furthermore, the research looks at experiences with border-crossing and regional displacement and how these can be studied through changing food systems.

The move towards markets and imported foods is taking place through several, linked processes namely: the monetization of exchange; commodification of goods and labour; and new patterns of accumulation and consumption, which have led to the uprooting of people from their land and other resources needed to sustain their own production.

These processes, explored in Displaced Tastes, have had a profound effect on what food is grown in, or imported into, the country. As a result, new foods are introduced into people’s diets; innovations are made in preparation and cooking methods; perceptions of what tastes good and is satisfying are being rethought; and the socio-cultural meanings of foodways—the rich meanings that people communicate through their attitudes, practices and rituals established around food—are shifting.

The research studies presented in this collection focus on people’s tastes for grains like sorghum, millet and maize and tubers like cassava—all of which form a major component of an everyday diet in South Sudan. The briefing draws on intimate conversations conducted in early 2019 by CUofSS researchers with Juba-based members of their wider family networks, and the female members of their families; grandmothers, mothers, aunts and sisters, in particular.