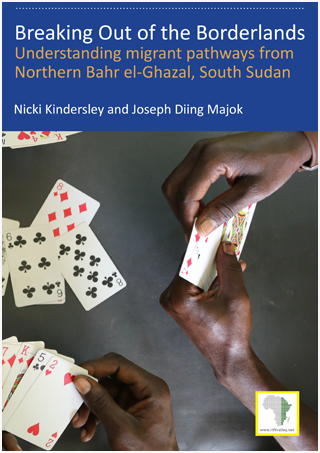 Breaking Out of the Borderlands is the second report by Dr Nicki Kindersley and Joseph Diing Majok on South Sudan’s changing borderland economy. The first report in the series—Monetized Livelihoods and militarized Labour in South Sudan’s Borderlands—described the protracted state of social and economic crisis that has gripped the borderland region of Northern Bahr el-Ghazal.

Breaking Out of the Borderlands takes the phenomena described in the authors’ earlier work—the monetization of land, life and work in the borderland—as its starting point but goes further; looking at the consequences of this system for the young people who live in this region. For many, the result is their departure, either to other locations in South Sudan—often Juba—or across the border into Sudan, Egypt, Libya and for some, Europe.

The report argues that the decision to leave South Sudan on long-distance migrant pathways can only be understood within the context of this militarized borderland economy. The young people who do decide to leave rely on mutual support and networks of information and care to survive. Due to distance and financial stress, these systems are now increasingly under strain.

Breaking Out of the Borderlands is a product of the X-Border Local Research Network, a component of the FCDO's Cross-Border Conflict—Evidence, Policy and Trends (XCEPT) programme, funded by UKaid from the UK government. The programme carries out research work to better understand the causes and impacts of conflict in border areas and their international dimensions.