Tax and the State in Somalia: Understanding domestic revenue mobilization

Tax and the State in Somalia: Understanding domestic revenue mobilization 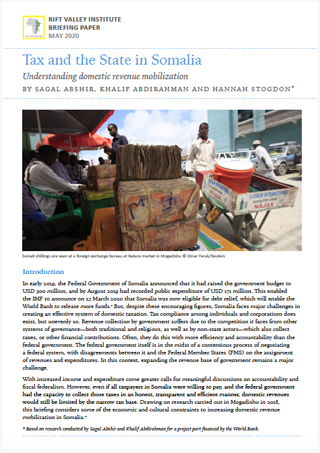 In early 2019, the Federal Government of Somalia announced that it had raised the government budget to USD 300 million, and by August 2019 had recorded public expenditure of USD 171 million. This enabled the IMF to announce on 25 March 2020 that Somalia was now eligible for debt relief, which will enable the World Bank to release more funds. But, despite these encouraging figures, Somalia faces major challenges in creating an effective system of domestic taxation. Tax compliance among individuals and corporations does exist, but unevenly so. Revenue collection by government suffers due to the competition it faces from other systems of governance—both traditional and religious, as well as by non-state actors—which also collect taxes, or other financial contributions. Often, they do this with more efficiency and accountability than the federal government. The federal government itself is in the midst of a contentious process of negotiating a federal system, with disagreements between it and the Federal Member States (FMS) on the assignment of revenues and expenditures. In this context, expanding the revenue base of government remains a major challenge.

With increased income and expenditure come greater calls for meaningful discussions on accountability and fiscal federalism. However, even if all taxpayers in Somalia were willing to pay, and the federal government had the capacity to collect those taxes in an honest, transparent and efficient manner, domestic revenues would still be limited by the narrow tax base. Drawing on research carried out in Mogadishu in 2018, this briefing considers some of the economic and cultural constraints to increasing domestic revenue mobilization in Somalia.