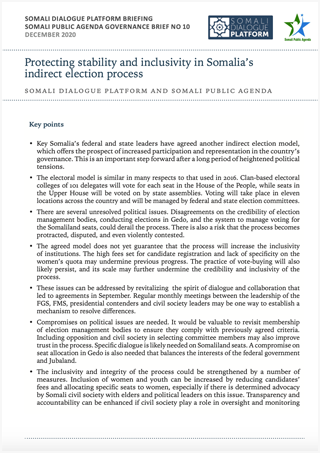 On 17 September, the leaders of the Federal Government of Somalia (FGS) and all five Federal Member States (FMS) agreed on an indirect electoral model for the country’s upcoming polls. Building on a series of discussions in Dhusamareb in July and August, the model has since been approved by parliament and set out in more detail in subsequent agreements on 2 October.

While the agreement demonstrated that Somali leaders have reached a point of much needed consensus on electoral design, there are a number of weaknesses and ambiguities that, if left unaddressed, threaten the inclusivity and integrity of the process. There are also several contentious political issues that, if unresolved, may also increase the risk of conflict emerging in the coming months.

This briefing provides an overview of the current election model, including contentious political issues, and risks to the integrity and inclusivity of the process, as well as options for addressing both. It is intended to support Somalis come together in dialogue around the process, with the aim of increasing its inclusivity and credibility. The issues laid out here will be best managed if they are discussed regularly through high-level dialogue, including the leadership of the federal government and member states, opposition figures and civil society.

This briefing is a joint product of RVI's Somali Dialogue Platform and the Somali Public Agenda. Read the Somali version here.