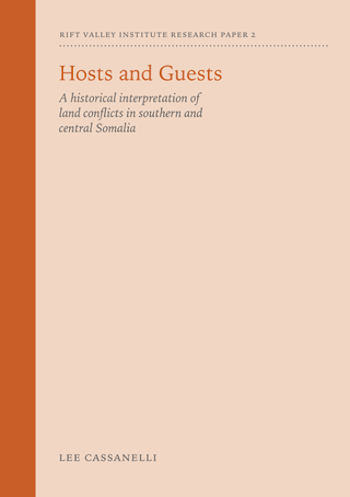 'In Somalia, land issues are particularly complex. Those involved in both policy and practice need to understand this complexity better if durable political solutions are to be identified and property rights for individuals and communities secured. Lee Cassanelli explains the complex nature of land use, as well as the concept of ‘home’ in the Somali context. His paper is food for thought for all those interested in land reform.'
NUUR MOHAMUD SHEEKH, IGAD

Contestation over land has been a key driver of violent conflict in Somalia. In Hosts and Guests, Lee Cassanelli argues that a historical approach offers an illuminating way of understanding these disputes. Many current conflicts there, he argues, are rooted in longer histories of competition over land and water between neighbouring communities, or in struggles between local land-holders and a predatory state. In the long run, even armed invaders of another clan’s territory tend to settle down and establish relations with the existing inhabitants; sometimes as their allies, sometimes as their overlords. Outsiders, today and in the past, have used a combination of armed force, marriage alliances, and promises of security and stability to assert their claims to land. The indigenous inhabitants may find themselves in a position as ‘guests’ or ‘clients’ of the new ‘hosts’. This process of territorial expansion and consolidation is a recurrent pattern in Somali history, although it may not be that favoured by international justice and humanitarian sentiment.