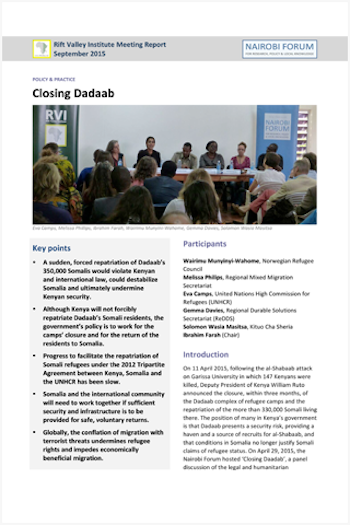 •    Although Kenya will not forcibly repatriate Dadaab’s Somali residents, the government’s policy is to work for the camps’ closure and for the return of the residents to Somalia.

•    Progress to facilitate the repatriation of Somali refugees under the 2012 Tripartite Agreement between Kenya, Somalia and the UNHCR has been slow.

•    Somalia and the international community will need to work together if sufficient security and infrastructure is to be provided for safe, voluntary returns.

On 11 April 2015, following the al-Shabaab attack on Garissa University in which 147 Kenyans were killed, Deputy President of Kenya William Ruto announced the closure, within three months, of the Dadaab complex of refugee camps and the repatriation of the more than 330,000 Somali living there. The position of many in Kenya’s government is that Dadaab presents a security risk, providing a haven and a source of recruits for al-Shabaab, and that conditions in Somalia no longer justify Somali claims of refugee status. On April 29, 2015, the Nairobi Forum hosted ‘Closing Daadab’, a panel discussion of the legal and humanitarian implications of a mass repatriation of Somali refugees.

Dadaab, commonly referred to as ‘the world’s largest refugee camp’ is actually a complex of five camps in North Eastern Kenya, near the border with Somalia. Somalis comprise the overwhelming majority of Dadaab’s 350,000 residents.1 The first 90,000 Somali refugees arrived in 1991, fleeing the civil war in Somalia that began that year. Subsequent waves of people fleeing war and famine swelled the numbers at the camps to a peak of half a million following the 2012 famine in Somalia. Dadaab has become not only a vast settlement (larger than Kenya’s fourth largest city), but also a complex administrative, logistical and security operation managed by the UNHCR with the help of some one hundred other non-governmental and international organizations.2 More than half of Dadaab’s residents are minors, many born in the camps.

Kenyan and international law, Solomon Masitsa from Kituo Cha Sheria explained, prohibits the forceful return or refugees to places where their lives would be in danger. Instead, Kenya and the international community are expected to find durable solutions for the refugees—voluntary repatriation, local integration or resettlement to a third country that will offer them permanent residency and a path to naturalization. However, over two decades after the first arrived, none of these have materialized as real solutions for hundreds of thousands of Somali refugees in Kenya.

Asylum fatigue and the Tripartite Agreement

There has been growing asylum fatigue in Kenya, Eva Camps of UNHCR said. It results from a complex of factors including alarm about al-Shabaab attacks and concerns about perceived changes in the ethnic composition of the country.3 Ruto’s April statement was not the first call for a closure of Dadaab by the Kenyan government. Similar statements, made after al-Shabaab attacked Nairobi’s Westgate Mall in 2013, led to the signing of the November 2013 Tripartite Agreement between Kenya, Somalia and the UNHCR. The agreement set forth roles of each party in developing and implementing a plan for large-scale voluntary return of Somali refugees, consistent with the durable solutions framework.

A pilot repatriation project under the agreement was launched in December 2014 with a target figure of 10,000 returns by June 2015. However, by April 2015, only 2,048 had returned. The slow pace of repatriation under the Agreement was due, Camps said, to a number of issues complicating implementation. Political and administrative changes in Somalia hampered the Somali government’s ability to create conditions for safe, voluntary returns. There were also environmental issues, as the rainy season stopped progress for its duration.

Even absent these factors, however, it is difficult to imagine that significant numbers of refugees will voluntarily return to Somalia in the near or even mid-term. Due to limited infrastructure and widespread material, personal and legal insecurity, few areas of south central Somalia enjoy conditions that meet standards for safe and sustainable repatriation. Speaking from the audience, Rita Mazzochi, a representative of a consortium working on building resilience in south central Somalia, reported that it is still impossible to move more than a few kilometres beyond urban areas there. Al-Shabaab operates in the whole area, she said, and, after an attack in Puntland that killed several UN workers, it seems to be growing stronger. Camps in contrast, said that that there are pockets of stability in Somalia that could safely accommodate refugees, and that donors need to engage as much as possible to further stabilize those areas.

There are more challenges than just security, however. Speaking from the audience in his personal capacity, Ambassador Ali Korane, Chairperson of the Refugee Affairs Committee of the Ministry of the Interior and Kenya’s envoy to the Horn of Africa, reported that seventy per cent of those who are in Daadab came from the neighbouring province of Jubbaland, and ninety per cent of these were not displaced by direct conflict but by recurrent drought and famine. ‘All the peace in the world would not allow them to return,’ he said.
In many cases, also, refugees have no fixed home to which to return. The majority were nomadic pastoralists who ranged over territories of five hundred or a thousand square kilometres. Yet now, after decades of sedentary life in Dadaab, most have adapted to an urban lifestyle, dependent on superior physical and social infrastructure, rendering their successful reintegration in rural Somalia even more unlikely. Diversity among the refugees will equally be a problem, Korane said, because even once infrastructure is built, it will be a challenge to identify groups of refugees homogenous enough to form successful settlements.

A forced repatriation under these conditions, the panelists agreed, would be counterproductive for Kenya. Camps predicted that if forcibly returned to unsafe places, the returnees would have to flee to Kenya again. Munyinyi-Wahome predicted that many, finding poor conditions for life in Somalia, could be susceptible to recruitment by extremists, pointing out that over half of refugees are under the age of eighteen. At the same time, she warned of the risk of creating conflict—especially over land and resources—between returnees and IDPs in Somalia, which could lead to cyclical displacement and the re-creation of refugees. Davies reported that the Solutions Alliance, a group that includes UNHCR, ReDDS, the World Bank and the Somali government, conducted a study that indicated that any mass repatriation under current conditions would likely destabilize Somalia and undermine gains made under the Tripartite Agreement. 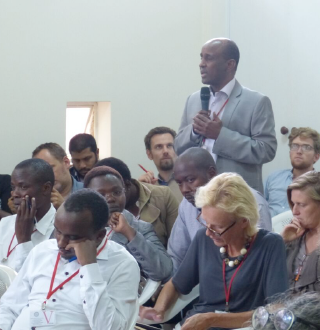 Korane dismissed fears of such a scenario. Kenya, he said, will not ‘take anyone by the neck and throw them into a lorry to take them across the border’. However, he confirmed that the government’s policy is to work for Dadaab’s closure and for the return of the refugees. Kenya, he added, is not alone in this effort. This year in Ethiopia, representatives of six countries collectively hosting one million Somali refugees—Kenya, Ethiopia, Djibouti, Eritrea, Uganda and Yemen—met with the government of Somalia and the High Commissioner to discuss a strategy for accelerating voluntary returns. Even without an immediate security threat, he said, the camps represent a potentially explosive situation. Young people in these communities, who are highly educated and have high aspirations—who should be contributing to the development of Somalia—are frustrated, with no access to jobs or chances for a better future. And the camps do present the government of Kenya with real security and political challenges, he asserted. ‘The group that attacked Garissa University stayed in the camp and collected arms there for two days before the attack,’ he said. ‘When these things happen there are very high emotions among Kenyans and they are justified, and the government is left containing the situation.’

Scapegoating refugees, however, is not a valid government response to these challenges, the panelists argued. Masitsa noted that when the government went to court to defend the 2012 directive that Dadaab be closed, it could offer no evidence that any refugee had been involved in the Westgate attack and to date no refugee has been convicted on a terrorism related charge. Kenya’s real problem with security is not refugees, Munyini-Wahome offered, it is poor overall security management. Terrorism, she said, is not the only grave security problem in the country. Kenya needs to apply objective rather than reactive strategies for improving security.

For example, Davies added, the reactive measure of closing the border between Somalia and Kenya has in fact undermined security. Because there is no immigration control, no one in the Kenyan government knows who is crossing the border. Refugee registration has also been closed for a long time, meaning that even data on who is in Dadaab is unreliable. The government, she said, should open the border for controlled immigration and work with refugees—many of whom are themselves running from al-Shabaab violence—to improve security.
Even as the Kenyan government has a responsibility to uphold the rights of refugees, Munyini-Wahome said, the Somali government should also do more to meet its obligations under the Tripartite Agreement. The international community too, should prioritize building infrastructure, schools and houses, and improving security in Somalia as a solution to the refugee problem. ReDSS, Davies stated in support of this assertion, has added reconstruction to the three traditional durable solutions, thus linking voluntary repatriation and post-conflict reconstruction, in an attempt to encourage the international community to bridge the gap between relief and development. In addition, ReDDS is pursuing the inclusion of refugee and IDP issues into each one of the Somali government’s state-building goals under the New Deal. Camps added that in the meantime, more support for the Kenyan government is needed to reinforce security in Dadaab, stating that while UNCHR contributes USD3.6 million annually to support the Kenyan police in providing security in Dadaab more funds and expertise are still needed. Once the camp is closed, the Kenyan government will also require donor engagement in the rehabilitation of the Dadaab area.

Perhaps just as urgently, however, the international community must do its part to change negative perceptions of migration and refugees. Melissa Phillips pointed out that Kenyan politicians are not alone, globally, in scapegoating migrants and refugees. Characterizations of refugees as security threats are increasingly common as the war on terror offers politicians a useful rhetoric for appealing to certain constituents. Philips cited an Italian opposition party member, who accused his government of using Italian ships to rescue migrants as ‘taxis for jihadists.' 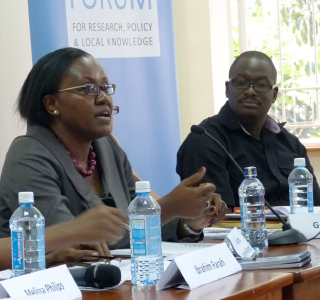 This kind of alarmist, anti-immigrant rhetoric has become part of the discourse on refugees in many countries. Refugees are convenient scapegoats: they do not vote and they are not citizens, and are thus easy targets. At the same time, draconian measures aimed at limiting immigration are being implemented under the auspices of the war on terror. ‘Immigration is now always seen through the lens of security’, she said, ‘which complicates immigrant integration and miscasts transnational links as threats to the integrity of the nation state.’ The result is that the global space for asylum seekers is shrinking, even as the global number of those fleeing crisis is at an all time high.

Phillips urged participants to question the presumption that borders can, or should, be neatly managed. Kenya, she pointed out, has just launched a diaspora policy recognizing the benefits of migration. Davies, agreed that mobility should be perceived as an opportunity not a threat, pointing out that refugees have had a positive economic impact in North Eastern Kenya and managed mobility could allow refugees to contribute to development on both sides of the border.

3. On the latter, see RVI meeting report Eastleigh and Beyond: The Somali factor in Urban Kenya.