Silence is a Woman

Silence is a Woman

Despite an increasing global commitment to the principle of equality, women continue to struggle for parity in political, economic and social spheres. This is most apparent in formal political office where the underrepresentation of women remains one of the most visible forms of gender inequality in the world today.

In 2010, Kenya adopted a new constitution following one of the worst periods of election related violence in 2008. The 2010 constitution includes a clause requiring that no one gender hold more than two-thirds of any elected or appointed positions in government. This brought new hope to aspiring female leaders in the country, and was welcomed by civil society and advocates of gender equality. The ideals of the constitution however, have not materialised, with the government failing to meet the 2015 deadline to fully implement the gender rule. 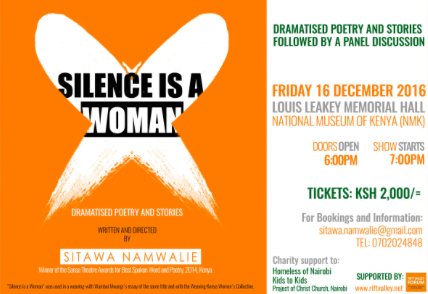 On 16 December 2016, the Rift Valley Forum and Heinrich Boll Foundation's Gender Forum hosted a panel discussion based on Silence is a Woman—dramatised poetry and stories by Sitawa Namwale— and ongoing research on women in politics in Kenya. With elections scheduled for 2017, this panel provided a timely opportunity to take stock and consider the enduring barriers to greater inclusion of women in public office. It explored the level of women’s representation in decision-making roles and considered the influence that women have when in positions of power.