The Great Lakes Course covers the Democratic Republic of the Congo (DRC), Rwanda and Burundi, providing a deep historical and social context to the current political and humanitarian dynamics in the region.

The 2017 RVI field Course on the Great Lakes will focus on transitions in the region. It will examine the extent to which the DRC, Rwanda and Burundi have transitioned into democratizing, post-conflict polities, and the prospects for consolidation or backsliding in the months and years ahead.

Years after the official end of large-scale wars, the Great Lakes Region continues to struggle with the peaceful transfer of political power. Burundi has been suffering from simmering conflict since 2015, when President Pierre Nkurunziza seized a third term despite arguments by the opposition that his bid was in violation of both the constitution and the Arusha Peace Agreement. What ensued was the most serious episode of political violence since the end of the civil war, resulting in even the militarization of the state and further restrictions on political space. 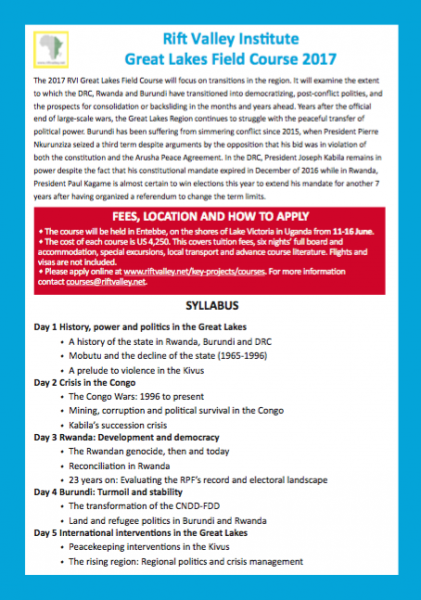 In the DRC, President Joseph Kabila remains in power despite the fact that his constitutional mandate expired in December of 2016. His failure to prepare and hold elections as scheduled have plunged the country in a political crisis marred with violence and increased uncertainty about the country’s political future. Meanwhile in Rwanda, President Paul Kagame is almost certain to win elections this year to extend his mandate for another 7 years after having organized a referendum to change the term limits. The inability to find a successor to Kagame—23 years after the end of the genocide and the war—casts doubt on whether the political elite has enough confidence in the country’s peacebuilding and reconstruction efforts to allow someone else to govern the country.

This year, the Great Lakes course will focus on these pressing political battles. The course is in English and French with simultaneous translation.

The Co-Directors of Studies for the course will be Jason Stearns and Yolande Bouka. They will be joined by a team of leading regional and international experts. These will be announced over the course of the coming months.

Highlights of the syllabus

DAY 1 History, power and politics in the Great Lakes

DAY 2 Crisis in the Congo