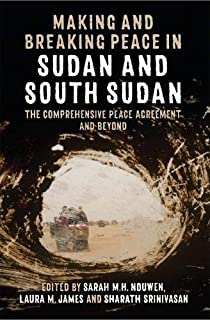 Sudan's 2005 Comprehensive Peace Agreement ended more than two decades of civil war and led to South Sudan's independence. Peacemaking that brought about the agreement and sought to sustain it involved, alongside Sudan, an array of regional and western states as well as international organizations. This was a landmark effort to create and sustain peace in a war-torn region. Yet, in the years that followed, conflicts continued or reignited, both in Sudan and South Sudan. Peacemaking attempts multiplied.

On 16 March 2021, the Rift Valley Forum, in collaboration with the British Institute in Eastern Africa, will launch the book, Making and Breaking Peace in Sudan and South Sudan, authored by practitioners and scholars who examine the question of which and whose ideas of peace and peacemaking were pursued in the Sudans and how they fared. Bringing together economic, legal, anthropological and political science perspectives on more than a decade of peacemaking attempts, the book provides insights for peacemaking efforts to come, in the Sudans and elsewhere.