Skip to main content
PUNTLAND DEMOCRACY: THE NEED FOR AN EFFECTIVE JUDICIARY SYSTEM|Home

PUNTLAND DEMOCRACY: THE NEED FOR AN EFFECTIVE JUDICIARY SYSTEM

PUNTLAND DEMOCRACY: THE NEED FOR AN EFFECTIVE JUDICIARY SYSTEM 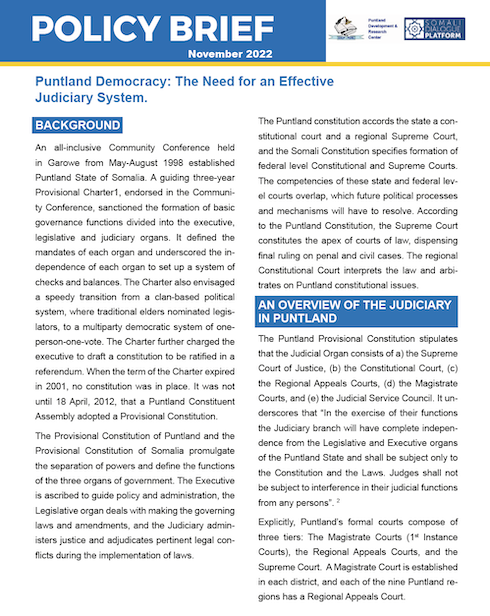 An all-inclusive Community Conference held in Garowe from May-August 1998 established Puntland State of Somalia. A guiding three-year Provisional Charter, endorsed in the Community Conference, sanctioned the formation of basic governance functions divided into the executive, legislative and judiciary organs. It defined the mandates of each organ and underscored the independence of each organ to set up a system of checks and balances. The Charter also envisaged a speedy transition from a clan-based political system, where traditional elders nominated legislators, to a multiparty democratic system of one-person-one-vote. The Charter further charged the executive to draft a constitution to be ratified in a referendum. When the term of the Charter expired in 2001, no constitution was in place. It was not until 18 April, 2012, that a Puntland Constituent Assembly adopted a Provisional Constitution.

This briefing provides an overview of the judiciary in Puntland, the challenges it faces and policy recommendations. It was produced through a collaboration between Puntland Development and Research Centre and the Somali Dialogue Platform (Wadahadalada Somaaliyeed). The Platform is a programme, implemented by the Rift Valley Institute, that works to facilitate agreement amongst Somalis on contentious political issues.

Downloads
Policy Brief - The Need for an Effective Judiciary System..pdf