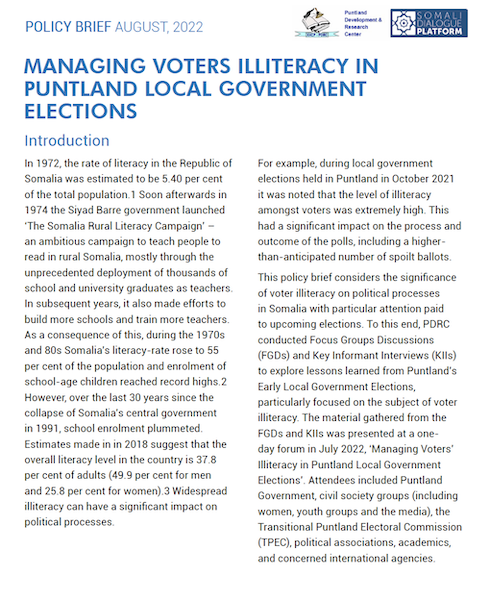 In 1972, the rate of literacy in the Republic of Somalia was estimated to be 5.40 per cent of the total population. Soon afterwards in 1974 the Siyad Barre government launched ‘The Somalia Rural Literacy Campaign’ – an ambitious campaign to teach people to read in rural Somalia, mostly through the unprecedented deployment of thousands of school and university graduates as teachers. In subsequent years, it also made efforts to build more schools and train more teachers. As a consequence of this, during the 1970s and 80s Somalia’s literacy-rate rose to 55 per cent of the population and enrolment of school-age children reached record highs. However, over the last 30 years since the collapse of Somalia’s central government in 1991, school enrolment plummeted. Estimates made in 2018 suggest that the overall literacy level in the country is 37.8 per cent of adults (49.9 per cent for men and 25.8 per cent for women). Widespread illiteracy can have a significant impact on political processes.

This policy brief was produced through a collaboration between Puntland Development and Research Centre and the Somali Dialogue Platform (Wadahadalada Somaaliyeed). The Platform is a programme, implemented by the Rift Valley Institute, that works to facilitate agreement amongst Somalis on contentious political issues.