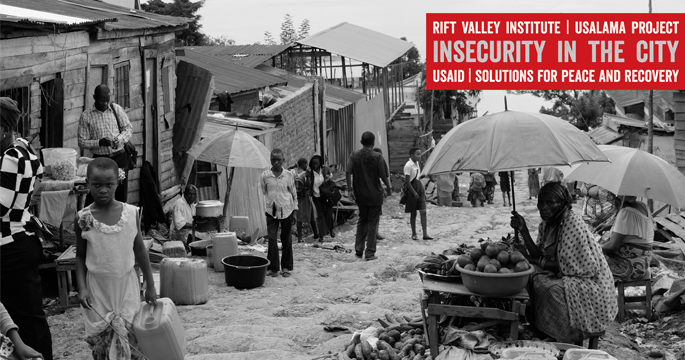 The eastern Democratic Republic of the Congo has been mired in violence for two decades and continues to be plagued by rampant insecurity. Yet, the drivers of this insecurity remain poorly understood. The Usalama Project is a field-based, partner-driven research initiative that aims to examine dynamics of conflict and violence and their effects on Congolese society (Usalama is Swahili for safety or security). It constitutes a source of reliable and public information for a wide audience from policymakers to civil society activists, both in the Congo and beyond.

The Usalama Project takes a qualitative approach to field-based research. It examines agents of security and insecurity and analyses the contexts in which they operate by means of interviews with a wide range of actors—including local authorities, representatives of civil society, and members of security agencies and non-state armed and vigilante groups. It also draws upon available historical and administrative sources, reports and scholarly work by Congolese and international researchers and organizations.

The third phase of the Usalama Project started in 2018, in partnership with the Groupe d'Etudes sur les Conflits et la Sécurité Humaine (GEC-SH). Entitled ‘Insecurity in the City’, the project examines urban security, conflict dynamics and social cohesion in the cities of Goma and Bukavu in the eastern Congo. Specifically, the project investigates the role of state and non-state actors in the provision of security, and citizens’ perceptions of, experiences with and responses to insecurity. The research asks: Who are the main agents of security and insecurity in the city? What are the drivers, logics and trends of urban insecurity? What are residents’ perceptions of insecurity? And how do they deal with insecurity in their everyday lives? The project produced three reports, two briefings and ten blogs.

The ‘Insecurity in the City’ phase of the Usalama Project is part of the Solutions for Peace and Recovery (SPR) project funded by the United States Agency for International Development (USAID). The project explores the possibilities for, rationales behind and effects of improving social cohesion as a mechanism to establish durable peace in the eastern Congo.

Read the reports from Phase III:

A System of Insecurity: Understanding urban violence and crime in Bukavu

Rebels and the City: Urban dimensions of armed mobilization in the eastern Congo

Read the Usalama blog series on urban insecurity as experienced by different professional groups and layers of the population here.

The second phase of the Usalama Project, led by Judith Verweijen, was launched in 2015. Entitled ‘Governance in Conflict’, it examines the relationship between armed groups and local governance structures in the eastern Congo. The project asks a number of questions: How do armed actors affect conflicts related to public authority? How, in turn, do local authorities shape patterns of armed group organization? And what are the effects of armed group presence on governance and service provision? The research also examines government policies and external interventions aimed at reducing armed group activity and improving the quality of local governance and conflict resolution.

The ‘Governance in Conflict’ phase of the Usalama Project is part of the Political Settlements Research Programme (PSRP) funded by the UK Department for International Development (DFID). This is a four-year research programme on political settlements in conflict-affected states which aims to inform policy at the national and international level. It is implemented by a consortium of five partners, including the Rift Valley Institute, and is led by the University of Edinburgh’s Global Justice Academy.

The first phase of the Usalama Project ran from 2012-2013 and was led by Jason Stearns. Entitled ‘Understanding Congolese armed groups’, it addressed the lack of knowledge about armed groups and the national army in the eastern Congo. To that end, it poses a series of questions such as: What is the history of these armed groups? Who supports and controls them? What are the relations of particular groups to the state, to neighbouring states, to business interests and to the Congolese armed forces? Why have some groups been so difficult to demobilize, while others have disappeared? The project produced eleven research reports and four briefings over a period of 18 months, which are available in English and French.

This phase was conducted in partnership with the Catholic University of Bukavu, with support from the Open Square Project and Humanity United.