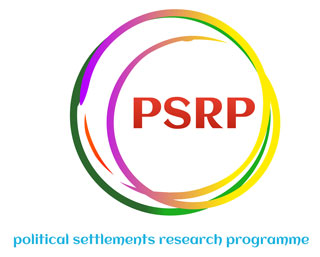 How do so-called fragile states exercise and maintain political power? What actors and institutions are involved in this process? How do they distribute the spoils of power amongst the elite and the population at large?

These questions lie at the heart of a new research programme on political settlements in conflict-affected states funded by the UK Department for International Development (DFID). The Political Settlements Research Programme (PSRP) is a four-year programme that aims to inform policy at national and international level. It is implemented by a consortium led by the University of Edinburgh’s Global Justice Academy. The other partners in the consortium are the London and Nairobi-based Rift Valley Institute, the London-based Conciliation Resources, the Transitional Justice Institute at Ulster University and the Institute for Security Studies in South Africa.

More information on the PSRP can be found on the programme’s website.

Armed groups and public authority (DRC)
This research project aims to investigate the impact of armed group activity on governance structures at the sub-national level in the eastern DRC. Building on the first phase of RVI’s Usalama Project, the project will ask how armed actors draw upon and affect conflicts surrounding public authority, how they influence and are in turn influenced by local power configurations, and how they engage in and affect public service provision. Finally, the research will look at the possibilities for, rationales behind and effects of external interventions which aim to reinforce state institutions in contexts of pronounced armed group activity. More information can be found on the PSRP website.

From 6 to 7 July 2015, the Rift Valley Forum hosted a two-day training workshop in Bukavu, in the eastern DRC, as part of the PSRP. The workshop brought together ten researchers, eight of them from the Congo, in preparation for a research project on public authority and armed groups in the DRC’s two Kivu provinces.

Stabilization and political settlements (Somalia)
This research project will examine how donors and other external actors can best support projects of transformation of political settlement, across areas of economy, governance and conflict-resolution, by examining how large-scale stabilisation plans are understood, implemented and received.

More information can be found on the PSRP website.