The South Sudan National Archive Project is a multiphase project for the conservation, reordering, cataloguing and digitization of the historical government records of South

Sudan, implemented in collaboration with the Archive Department of the Ministry of Culture, Youth and Sport. The project is designed to safeguard the contents of the Archive and make them more widely accessible to the general public in South Sudan and beyond. The documents in the Archive, which number tens of thousands, date from the colonial era up to the 1980s. They cover political, social and administrative issues at local and regional level over a period of eighty years. The documents form a core collection destined for the future South Sudan National Archive Building, funded by the Government of Norway and currently at the design stage.

Government records in South Sudan suffered serious damage during the 1983-2005 civil war in southern Sudan. Many of these records were gathered together in Juba in the 1970s and early 1980s following the first civil war in the south; during the second civil war, they were scattered, disordered and sometimes destroyed. Tens of thousands of documents were stored in sacks in damp basements, damaged by water and attacked by termites. The contents of the archive range from the 1900s to the 1980s; they are often the only detailed records of previous local Southern administrations in existence. The archive forms the primary historical resource for the development of South Sudanese national identity.

Emergency work on the restoration of the Archive began before Independence, in 2008, during the period of the Comprehensive Peace Agreement. This preliminary phase of work, supported by the US Ambassadors’ Cultural Fund, involved the erection of a storage tent near the Muduriya, the administrative headquarters of Central Equatoria state. The surviving documents from the Archive were collected from the various locations where they had been stored in Juba during the war, and moved to the tent. The documents were deposited in the tent in a disordered state, some in boxes, some in burlap sacks, some in folders, some as loose papers, many of them in very poor condition. 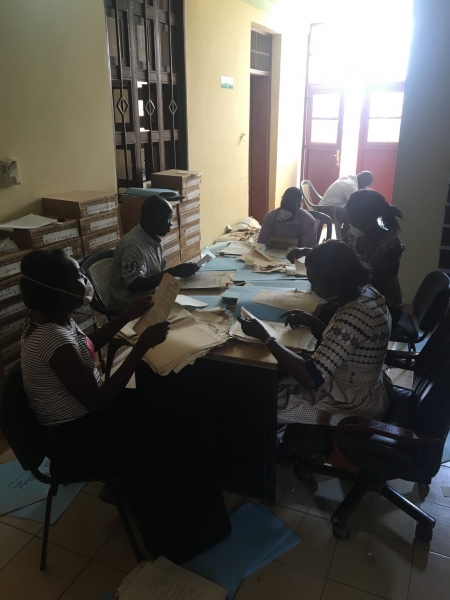 The second phase followed in 2010 with a joint pilot project of the British Institute in Eastern Africa (BIEA) and the RVI, which was implemented under contract to the Ministry of Culture, Youth and Sport. This initiated the process of emergency conservation, organization and digitization of the documents in the Archive, and involved the provision of archive boxes and digitization equipment and training for South Sudanese in digitisation techniques and archiving practice. The third phase of this project began in 2012 with a six-week project, funded by Michigan University and implemented by RVI, which continued the work of emergency conservation, organisation and digitisation of the Archive.

Following the independence of South Sudan in 2011, a new era for the Archive project began with the support of the Government of Norway for the construction of a permanent South Sudan National Archive Building. The Norwegian grant also supports the continuation of the work of cleaning, ordering, boxing and cataloguing the documents in the Archive, with a view to safeguarding them in the short term, relocating them and preparing them for eventual installation in the completed National Archive building. Work on the preservation and ordering of the physical documents is being implemented by the RVI under a contract with UNESCO. The work of digitisation continues separately, supported independently by the Rift Valley Institute. The Norwegian Government and the Prince Claus Foundation have jointly provided support for the renovation of a temporary building to provide accommodation for the Archive pending construction of the permanent National Archive Building.

To promote the National Archives, and the diversity of information they contain, RVI worked with the Ministry of Culture, Youth and Sports and UNESCO, with support from Norway, to develop the Tarikh Tana (Our History) radio series, aired live on Eye Radio. On a weekly basis throughout November 2017, one document was showcased and South Sudanese panelists were invited to discuss the documents’ core components and their significance in the modern context. These radio shows ran alongside public exhibitions showcasing a wider selection of the documents.

Currently, about 25 per cent of the documents have been digitized and with recent support from the Swiss Federal Department of Foreign Affairs, RVI and the national archives staff are now resuming the digitization work and scanning the documents so that they can be preserved in electronic format.