South Sudan’s borderland region with Sudan, in Northern Bahr el-Ghazal, is a hard place to make a living. Jobs are scarce, livelihoods insecure and movement across the border is heavily regulated. The region's women often bear the heaviest burden as they strive to make the best choices for their families. Joseph Diing, a researcher on RVI’s X-Border Local Research Network, visited the region in December 2018 to better understand how they survive in this difficult environment. 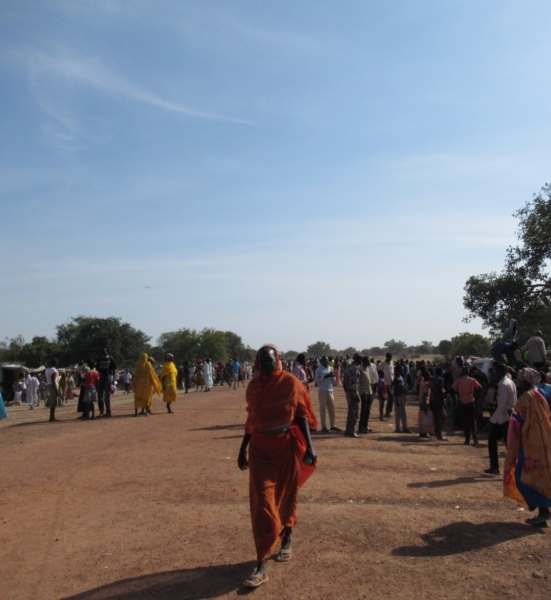 Majok Nyinh-Thiou (Majok) is a small market town on the border between Sudan and South Sudan, four hours’ drive to the north-east of Aweil. It is one of the main border crossing points between the Northern Bahr el-Ghazal region in South Sudan and the Sudanese regions of Kordofan and Darfur. For this reason, it attracts many traders and migrants, although border crossings are strictly regulated by the South Sudanese military (SPLA).

Historically, Majok has had a close relationship with towns like Meiram and Muglet that are now on the Sudanese side of the border. However, this relationship has often been disrupted by the region’s conflicts, which have restricted the mobility of the local population and shaped the way that people have built often insecure livelihoods. Majok has retained a heavy security presence, with many SPLA soldiers deployed there to control border crossing and manage the lucrative collection of fees and taxes that result from it.

While Northern Bahr el-Ghazal suffered from raiding by pro-Khartoum militias during the Second Sudanese Civil War (1983-2005), the region escaped the worst of the fighting during South Sudan’s civil war. Nonetheless, this national conflict has contributed to increased economic pressures on the region’s women.

Many of Northern Bahr el-Ghazal’s young men joined the pro-government Mathiang Anyoor (Brown Caterpillar) militias in 2012 and 2013, which were first formed to protect the border after independence. They later became a source of fighters loyal to President Kiir’s government and many were deployed in conflict zones after the war broke out in December 2013.  Those who were killed or lost contact with their families often left their wives as the sole breadwinners.

The region’s conflict-affected economy has created a substantial population of women forced to scratch out a living in an increasingly marketized economy. We met some of these women in Majok’s busy market, sitting in grass-thatched shops selling tea, roasted nuts and other foods like vegetable leaves, wild fruits, dried fish and meat.

We sat down with Rebecca Anger, a widow in her early thirties with three children. Rebecca was born during the war between the SPLA and the Sudanese government. Unlike many of their neighbours who left for the north, Rebecca’s family chose to remain in their village south of Majok.

The family survived on farming, gathering wild foods and some humanitarian assistance. They also brewed alcohol to sell to SPLA soldiers. Brewing became a source of money for many women from southern states, who would make beer and sell it in the north where the Islamist government had made it illegal, but demand remained strong.

After the war, Rebecca married an SPLA finance officer. He died from illness in 2013 just before South Sudan’s civil war broke out in Juba. At first, Rebecca was left to look after her children on her own, but her husband’s younger brother later adopted her as a wife. She has had two children by him, but he only comes home occasionally and doesn’t provide money for food. Rebecca is responsible for paying all the living costs for her family.

Rebecca makes a living by selling tea and roasted nuts in the market. She has considered going to the north to resume her alcohol brewing business, which she thinks will provide a better income than her tea stall. However, she fears the consequences of risking the border crossing, which she hears has grown more difficult in recent years—those caught crossing without the right permissions may be beaten, tortured or arrested and forced to pay for their release.

Local governance and security organs regard border crossing by women and children as a long-term threat to the region. They fear that it will artificially reduce the population and therefore weaken the region’s political and economic status. Mothers are told that children are the property of the country and should not move across the border with them.

The women who want to cross have two options: either they pay a local chief to draw up a travel permit, which states that they are crossing for medical reasons, or they can bribe SPLA soldiers to help them cross safely. Regulation of the border has therefore become a lucrative business for some SPLA soldiers.

Many women who can’t afford these options are now living in Majok, where they try to gather enough money to pay for illegal entry in to Sudan. Those who cannot afford to pay for permits or bribes sometimes travel to the border on foot through the forest and enter Sudan via this route. Due to the presence of armed militias, this route is risky. The militia groups rob travellers or ask for bribes by threatening to take them to the border authorities. It is even more dangerous for women, who may be subjected to sexual violence.

The strict regulation of the border also affects the truck trade between Northern Bahr el-Ghazal and Sudan. Evidence of this could be seen on the main highway south that runs between Warawar in South Sudan and Meiram in Sudan, with trucks loaded with foodstuffs parked there throughout the day. They had arrived in Majok overnight from Sudan—crossing the border illegally under cover of darkness.

This illicit trade across the border is a lucrative business. It is controlled by Sudanese Misseriya who inhabit Meiram and the areas around it. Local businessmen in Meiram, who have developed relationships with the security forces on the border, buy goods from Khartoum-based traders and smuggle them into South Sudan overnight where they can get a higher price.

The South Sudanese soldiers deployed on the border rarely arrest the drivers if they are caught. Instead, they have set up many roadblocks between Majok and Aweil and unofficially tax the trucks. For this reason, the soldiers and their commanders on the border prefer to have many more trucks entering South Sudan through Majok.

The life stories told to us by Rebecca and other women in Majok help us understand some of the difficult choices that women in Northern Bahr el-Ghazal face, particularly those who have little or no support from their husbands. Surviving in the border economy is hard, with little prospect of self-advancement. But the alternative is to risk the crossing in to Sudan, which brings more dangers for them and their children. This has been made more difficult by the strict regulation of the border since independence, making it difficult, expensive and risky for traders and individuals to cross. This often leaves women, like Rebecca, trapped in a low-margin economy in towns like Majok, surviving as best they can.