This blog is the third part of a research project called ‘Navigating migration and the experiences of Congolese refugees in Nairobi’. The project’s aim is to better understand the drivers and dynamics of Congolese migration to Nairobi, and the lived experiences of migrants in Kenya’s capital, in light of the rapidly increasing levels of Congolese refugees in Kenya and, unlike for instance Somali refugees, their tendency to live in Nairobi as opposed to the refugee camps. Better understanding these realities can help contribute to a more sustainable, people-centred and comprehensive refugee response, especially considering donor countries’ aims for housing refugees in the region. The project was funded by the British Institute in Eastern Africa (BIEA) and fieldwork was carried out in September and October 2017. A total of 20 interviews were conducted, primarily with Congolese refugees and asylum seekers but also visa-holding migrants active in business and student politics, representatives from government and NGOs, and Kenyan residents. This blog was written by Connor Clerke. 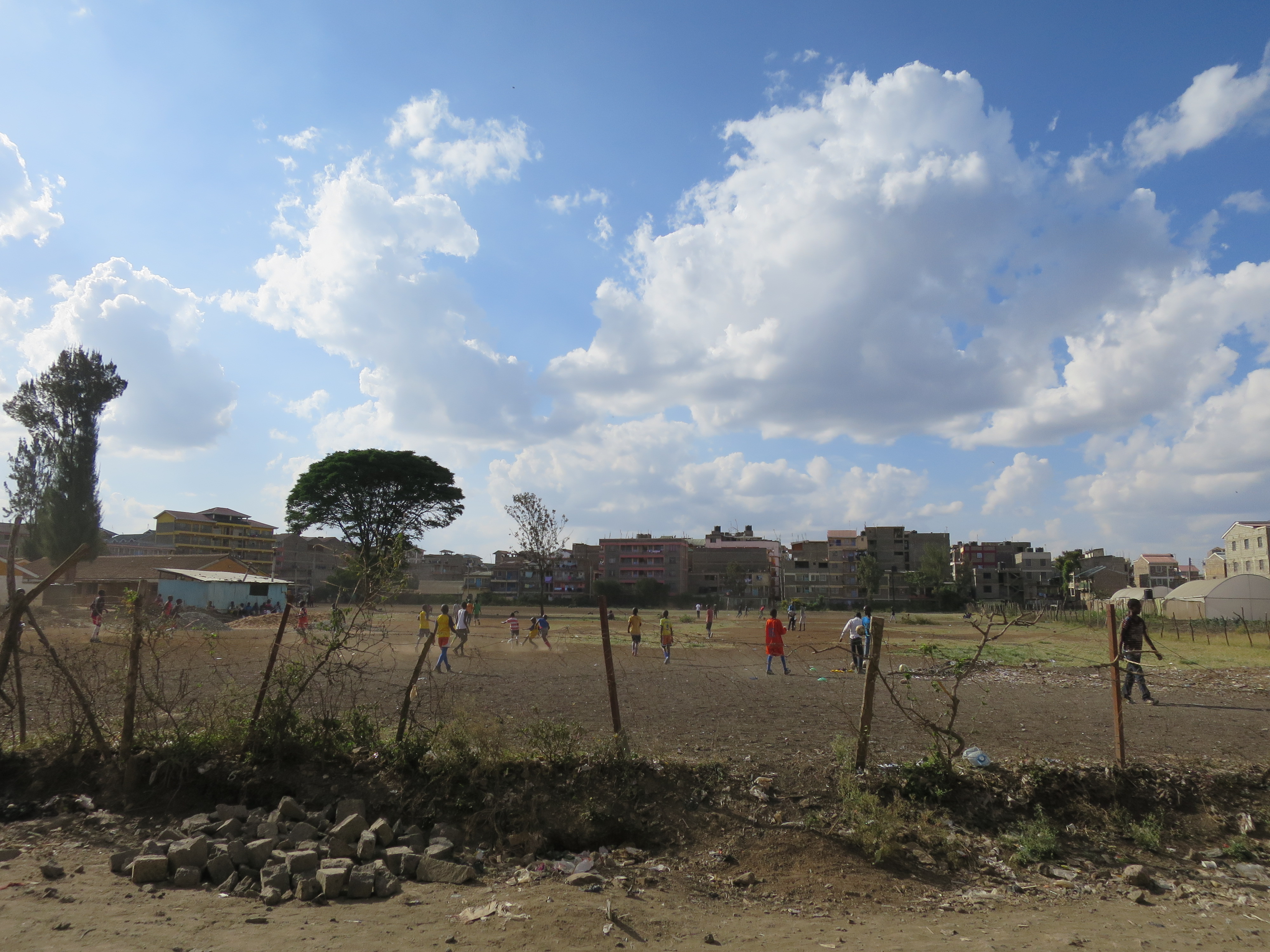 ‘I am a human being. How can I be treated like this every day? I’ve never killed anybody, never shouted at anybody.’[1] For Congolese refugees and asylum seekers in Nairobi, fleeing war in the DRC has been met with a new set of challenges. Stuck in limbo, with few opportunities for work, they must find ways to navigate the bureaucracy of refugee affairs and a myriad of other challenges to survive in Kenya’s capital.

This blog is the third part of the Navigating migration and the experiences of Congolese refugees in Nairobi series and will explore the reasons why so many Congolese refugees and asylum seekers in Kenya choose to live in Nairobi rather than the refugee camps in Kakuma and Dadaab, what the main challenges are for life in Nairobi, and how refugees and asylum seekers navigate survival between war in the DRC and ‘a peaceful life.’

As detailed in Part 1 of this series, Nairobi is home to a large majority of the Congolese refugees and asylum seekers in Kenya. In recent years, this population has grown significantly. While the majority of refugees and asylum seekers of other nationalities live in Kakuma or Dadaab (93 and 95 per cent of Somalis and South Sudanese, respectively) 67 per cent of Congolese live in Nairobi.[2]

One possibility could be the simple matter of geography. The refugee camps in Kakuma and Dadaab were established close to the borders of South Sudan (Sudan at the time) and Somalia in 1992 and 1991, respectively, to serve those populations fleeing conflict at the time, while ongoing instability has necessitated their continued operation. However, the Congolese refugees interviewed use a different route—one that does not bypass the refugee camps. Combined with a desire to go abroad from Kenya, they pass through Rwanda and Uganda and onwards to Nairobi, where they can register with the UNHCR.

While geography may determine where they arrive and register, the decision to stay in Nairobi is often a result of the perceived insecurity of Kenya’s refugee camps, or for Patrick—a contact in Nairobi's Congolese community—and those who have spent time in camps before, a desire to pursue a more fulfilling life outside of a camp.

Respondents described the two main fears of Kakuma and Dadaab as terrorism associated with al-Shabaab and attacks by other Congolese communities, often associated with Mai Mai groups. A young man explained this fear as such: ‘In Dadaab, [there are] many Somalis and we are afraid of them because we are Christian.’[3] Similarly, a woman from Uvira said she did not go to Dadaab because they [al-Shabaab] are killing people there while a man from Rurambo chose to stay in Nairobi because, according to him, there are Mai Mai groups in the camps who do not like the Banyamulenge.[4] Thus, Nairobi offers a certain level of security that the camps do not; a sense that one can hide in the city.

A representative from the government’s Refugee Affairs Secretariat (RAS) acknowledged the first fear, which reflects a controversial narrative that associates (primarily Somali) refugees with terrorism.[5] However, the representative questioned the perceived insecurity of the camps in regards to violence between Congolese communities and said he was not aware of any such attacks.  In fact, he went on, concentrations of Congolese communities in different neighbourhoods of Nairobi, such as Umoja and Kasarani, would suggest they are no more secure in the city than they are in the camps. Although one respondent discussed several incidents of Banyamulenge being attacked in Nairobi by other Congolese, no other respondents shared similar experiences or fears.[6]

Whether real or perceived, the fear of attack in camps must be seen in the context of the lived experiences of insecurity in Nairobi and therefore taken seriously. ‘Kenyans don’t love Congolese’, Patrick explained, ‘when you go to the police to say someone beat you, they don’t help, when you have money, they can help you.’[7] Similar experiences with the police are not uncommon and there is a general fear that a mandate from the UNHCR is insufficient protection against police harassment. ‘Kenyans don’t like us as people’, another respondent explained, ‘people say go back to your country.’[8] A man from Uvira added, ‘Kenyans think we have support from UNHCR [but the] UN doesn’t give you one shilling.’[9] For others, Kenyans have been hospitable hosts. A young man from Rurambo said he learned English through his Kenyan friends and that their hosts provided support to his family as they settled in Nairobi.[10]

Beyond insecurity and discrimination, Congolese face a number of other challenges in Nairobi, most of which stem from their status as asylum seekers or refugees.

‘Job is just to survive life’ 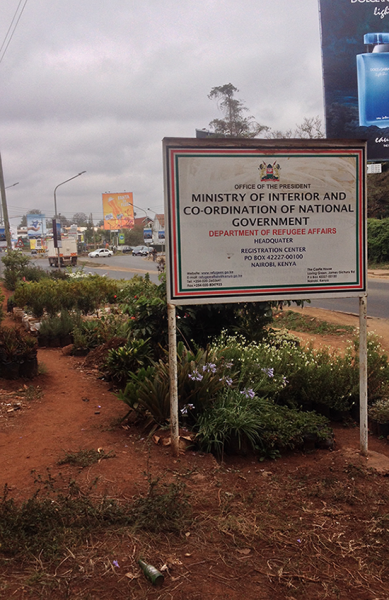 The process of resettlement begins with registering as an asylum seeker with the UNHCR. The UNHCR carries out this process alongside the Kenyan government’s Refugee Affairs Secretariat. Currently, only South Sudanese nationals are able to obtain refugee status immediately upon arrival; called prima facie. Other nationalities are given an asylum seeker mandate from the UNHCR and a date for their refugee status determination (RSD) interview. During this period, they are not eligible to work but have the right to reside in the country. Although they are encouraged to go to the refugee camps, they are not obliged to do so and previous attempts to force people to go to the camps—such as the arrest and transfer to Dadaab of approximately 200 Congolese refugees in 2014—have been met with criticism.

If an asylum seeker’s claim is deemed valid during their RSD interview, they are granted refugee status, which also makes them eligible for a work permit, and is the next step towards resettlement. However, a representative from the Refugee Consortium of Kenya explained that the process for obtaining a work permit is not easy and applicants are made to jump through hoops, often going back and forth between government departments.[11]

Thus, employment is one of the most significant challenges for Congolese refugees in Nairobi and in turn impacts access to education, health care and other services.

‘Life in Kenya [is] very difficult for eating, clothing … job is just to survive life’, Patrick explained. Like Patrick, the majority of male respondents interviewed work as barbers in the various salons scattered across Umoja. As we walked through the neighbourhood, we would regularly stop to greet Patrick’s Congolese friends at work. At the salon he works at, Patrick’s colleagues include two other asylum seekers—a woman from Uvira and a man from Burundi. The man from Burundi arrived in Nairobi in 2011 but was rejected for other work because of his status until he found his job at the salon.

‘There are things you can’t do because you are a refugee’, said a man who sells traditional Congolese clothing. ‘If you don’t have mandate from UNHCR, you can’t work’, he continued, ‘you survive yourself.’[12] In a similar vein, a woman from Uvira said, ‘I can’t do anything because I have no documents. I’m a single parent with four children [and] no one to support me … by the grace of God we survive.’[13]

Salons, I was told, do not ask for ID and are therefore one of the few places asylum seekers and refugees can work. However, beyond salons, there are few other opportunities for employment. The majority of people interviewed have some work, although not consistent. Some sell tea, coffee or other small items on the street while others work as night guards. Those who are unemployed depend on their spouses or children in Nairobi, family abroad, or church. Church also provides more than material support, as one man explained: ‘Even if I can’t get a job, if I pray, God will help you. That is our mind. Without a job, you can survive; without God, you cannot survive.’[14]

Despite having some work, the money earned often falls short of the cost of living. Patrick earns KES 10,000 (USD 98) per month but his rent is KES 4,500 (USD 44) per month and his other expenses—including clothing, food, cooking supplies, utilities and airtime—leaves him with little extra, not to mention little security in case of emergency. ‘Anytime you can lose your job, would have to leave house’, Patrick explained. In the case of two sisters who arrived in 2016, they were evicted from their flat after being unable to pay the rent and now live with a friend. 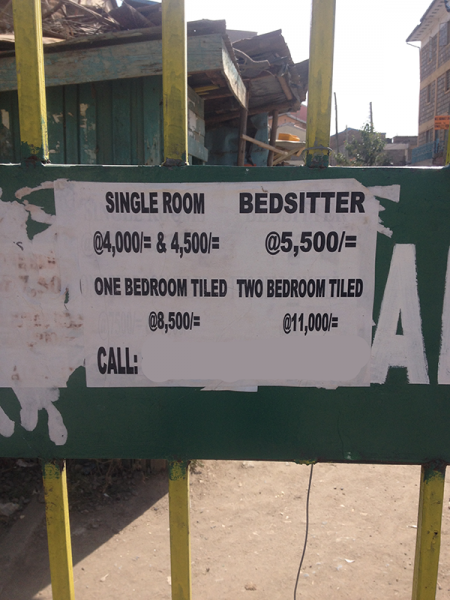 This lack of job security has further implications on things such as education and health. A family from Rurambo explained that they are unable to pay the school fees for their five children. Although both parents work, they also look after the husband’s mother. With no support from their church or friends and a rent of KES 9,000 (USD 89) per month, the children ‘don’t do anything all day.’[15] In a similar case, a single mother explained that her children only go to school periodically, when she has enough money to pay the fees, either from her work washing clothes or support from friends. Another man from Bijombo said he ‘pays rent and shopping with job, that’s all.’[16]

In terms of health, the grandson of a 63-year-old woman explained that she has been sick for three years but has never been to the hospital because her family cannot afford it. She has received medicine from a clinic but it did not work and her grandson thinks she needs an operation. In other conversations, respondents often highlighted the lack of medical insurance and the inability to access healthcare as a main challenge to life in Nairobi.

Although life is difficult for refugees and asylum seekers living in Kenya’s capital, they are generally well aware of the alternatives and make educated choices in an effort to pursue their goals. They are not reliant on the UNHCR, Kenyan government or NGOs, but instead utilize networks and information to navigate the bureaucracy of refugee affairs, challenging narratives of homogeneity and dependency.

Despite a rising trend in recent years to stem the movement of people, migration is an inevitable human activity. Therefore, efforts should be made to ease these movements while also making the journey and waiting period safer for migrants.[17] Improving the efficiency of the RSD process would limit the time asylum seekers are barred from legal employment or commencing processes for resettlement. Moreover, a clear procedure from the Government of Kenya on applying for and obtaining work permits would assist refugees in attaining their legal right to employment. This, in turn, would give refugees access to gainful employment. Finally, narratives that scapegoat refugees should be challenged to prevent discriminatory policies that separate families, infringe upon refugees’ rights and further marginalize vulnerable groups.