This blog is the first part of a research project called ‘Navigating migration and the experiences of Congolese refugees in Nairobi’. The project’s aim is to better understand the drivers and dynamics of Congolese migration to Nairobi, and the lived experiences of migrants in Kenya’s capital, in light of the rapidly increasing levels of Congolese refugees in Kenya and, unlike for instance Somali refugees, their tendency to live in Nairobi as opposed to the refugee camps. Better understanding these realities can help contribute to a more sustainable, people-centred and comprehensive refugee response, especially considering donor countries’ aims for housing refugees in the region. The project was funded by the British Institute in Eastern Africa (BIEA) and fieldwork was carried out in September and October 2017. A total of 20 interviews were conducted, primarily with Congolese refugees and asylum seekers but also visa-holding migrants active in business and student politics, representatives from government and NGOs, and Kenyan residents. This blog was written by Connor Clerke. 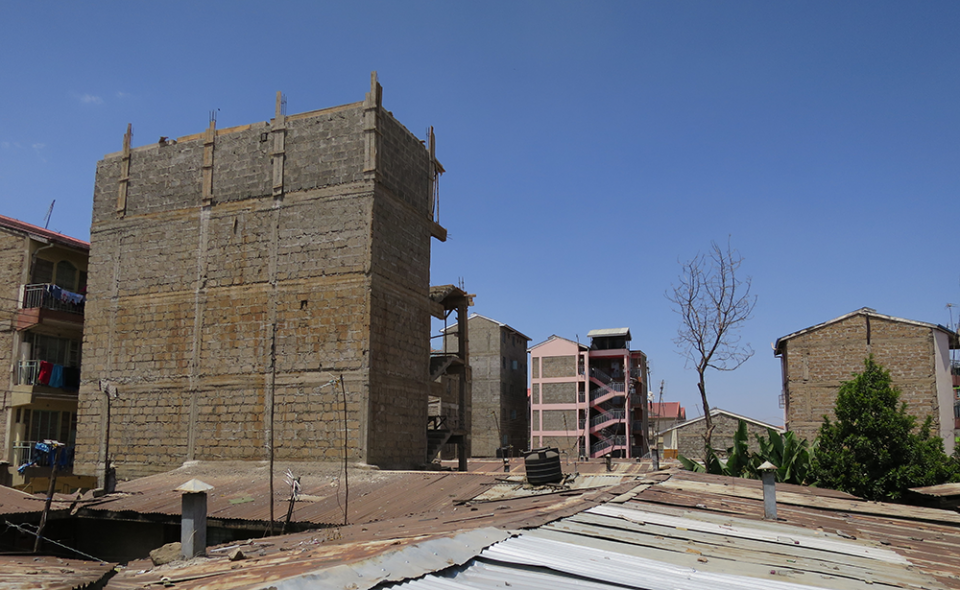 At the beginning of 2018, an estimated 600,000 Congolese refugees were residing outside of the Democratic Republic of the Congo (DRC) in sub-Saharan Africa. More than four million Congolese were displaced within the DRC. Since August 2016, the Kasai region of south-central DRC has been embroiled in conflict, displacing close to one million people and forcing tens of thousands to flee the country, mainly to Angola.[1] In the east of the country, violence and instability continues in Beni, South Kivu and Tanganyika, with spillover from the conflict in Burundi impacting security and armed group dynamics in the Congo’s turbulent eastern provinces.[2]

These conflicts and the tensions related to the delayed elections and the uncertainty surrounding the incumbent president’s future in power, are likely to increase the number of people fleeing the DRC. Large numbers are arriving in Angola and Uganda while others attempt to reach Europe or North America. The impact will be significant, both for the DRC’s neighbours and those on the move. In October 2017, the UN labelled the DRC a Level 3 emergency, reserved for the most severe emergencies and on par with Iraq, Syria and Yemen.[3]

According to the UNHCR, within sub-Saharan Africa, Congolese refugees[4] are concentrated in Uganda (221,838), Tanzania (82,000), Rwanda (75,000), Burundi (66,000), Angola (39,000) and Kenya (35,710). Although fewer in number, the population of Congolese refugees and asylum seekers in Kenya has rapidly increased by nearly 150 per cent from 2013 to 2017, becoming the third largest population behind Somalis and South Sudanese.[5] Congolese also make up the largest urban population and one of the few nationalities with more people in Nairobi than the refugee camps in Dadaab and Kakuma.

This is happening in the context of one of the largest movements of people seen since the Second World War[6], from Africa and the Middle East, with Europe often as the final destination. Migration has become a bone of contention both between and within these countries. With a tightening of borders in the West,[7] policymakers there are increasingly looking to regional housing of refugees, and a comprehensive and integrated refugee response in cooperation with both origin and transit countries (for instance, the Khartoum Process). These processes have attracted a lot of scepticism and criticism,[8] which is not necessarily the focus of these blogs. Rather, they are intended to build on the consensus that any sustainable migration or refugee response needs to be built on a comprehensive understanding of the flows of people, understanding their lived experiences and the decisions they face.

The experience of Congolese refugees in Kenya has been mixed. Unlike Uganda, Kenya does not offer prima facie refugee status to Congolese and the government has had an inconsistent approach to managing migrants. In 2014, the government began Operation Usalama Watch, an anti-terror initiative that led to widespread raids, arrests and detainments, primarily of Somali nationals but also Congolese. In May that year, a church in Kasarani in northeastern Nairobi was stormed by security forces and close to 200 Congolese were arrested. The detainees were transferred to the Dadaab refugee camp, leaving children and family behind, however, many were eventually able to return to Nairobi, some through the bribing of security officials.[9]

Following much scrutiny,[11] the government has adjusted its tactics but life remains challenging and insecure for Congolese residing in Kenya’s capital. Although refugees and asylum seekers are permitted to live in Nairobi, they are strongly encouraged to go to the country’s two refugee camps and very few organizations offer support to those in Nairobi.  Meanwhile, the rate at which the Congolese population in Kenya—Nairobi in particular—is growing is striking, from approximately 14,000 in 2013 to more than 35,000 in 2017, 67 per cent of whom live in Nairobi.[11] Although small compared to Somalis (284,346), because of the intractable conflict in the Congo and the staggering growth rate, it merits attention.[12]

What are the factors pulling Congolese past Burundi, Rwanda and Uganda to Kenya, where many face the challenge of not speaking English or Swahili? What contributes to the preference for the city—where little support is available—over the camps, especially in light of a waiting period of several years before being eligible for a work permit? And what are the long-term plans for the Congolese in Nairobi? Is Kenya a transit or destination country? Understanding the unique dynamics and experiences of Congolese refugees can help inform the push for comprehensive and people-centred migration policies. For example, the focus on the Dadaab refugee camp in Kenya—both in terms of media attention and funding[13]—risks ignoring the significant vulnerabilities of Congolese refugees living in Nairobi. Moreover, access to legal support—especially in light of the language barrier—deserves particular attention as Kenya undergoes a review of the 2006 Refugee Act. This is also likely to impact resettlement programmes, and therefore Congolese refugees’ mobility and long-term planning.

Along the dirt roads in Umoja, a neighbourhood of old and new, small, tin-roof structures rest at the base of looming high-rise apartment buildings, many still under development. A resident explained that ten years ago Umoja was a middle-class neighbourhood, but an influx of people from upcountry and foreigners in search of an affordable place to live in Nairobi has changed the character of the neighbourhood. There are too many people selling things, he explained, and now everything is so cheap. It will be a ghetto like Mathare soon, he predicted, referencing a slum opposite Umoja on the west side of Outer Ring Road.

Umoja is a popular neighbourhood for Congolese migrants, offering relative affordability and security. The growing Congolese community also helps new arrivals settle, through family connections, church and a sense of home outside the Congo.

Arriving at the bus stage in Umoja, a voice from a nearby shop called out to me. In the bright pink salon, I met Patrick, a tall, young man of about 20 years, who was cutting a man’s hair. The salon was no bigger than a shipping container and several people trickled in and out, buying airtime for their phones and watching news on the television overhead.

Patrick finished cutting the man’s hair, turned to me and said, ‘Okay, we can go.’ Down the dirt road outside, a bright green matatu with the name Forward Traveller passed by. We walked past a field where a football game was underway and periodically stopped to chat with friends. He later said, ‘We all know each other, we are all related,’ in regards to the Banyamulenge community. We turned down a narrow path, stepping over a stream of open-air sewage, moving aside to let a man and his cart go by.

He told me he arrived the year before from Rwanda, where he had been living in a refugee camp with his family. His brother lives with him in Nairobi, but had gone back to Rwanda until the Kenyan elections were over.

We ducked through a gate into a small, open-air compound, through another doorway and down a narrow hallway that was lit by a small window and smelt faintly of smoke. ‘This is my place,’ he said. 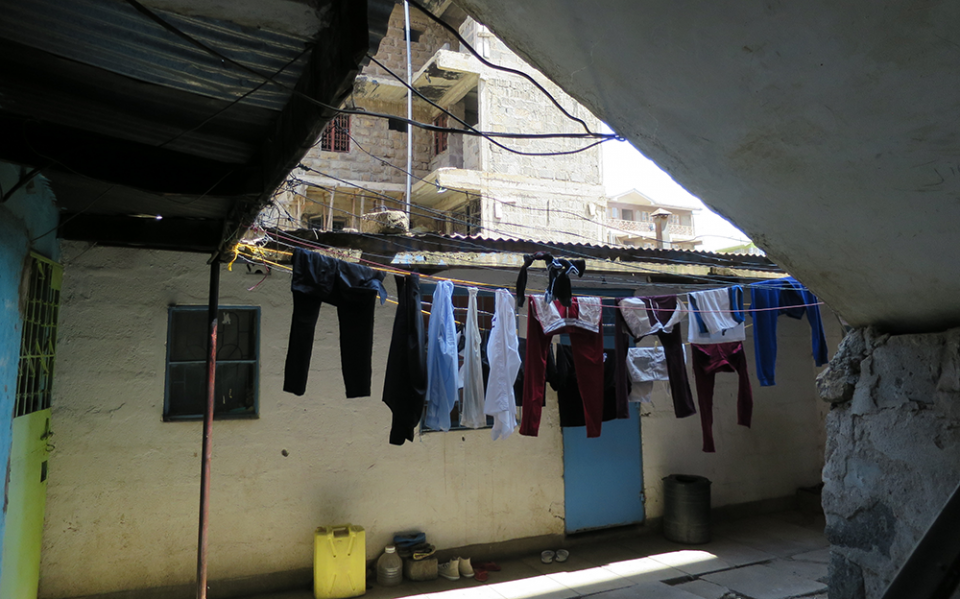 Patrick’s flat is a small room, with little extra space beyond the mattress on the floor. Originally from Uvira, his family left the Congo when he was only three years old, and have been in the Kiziba refugee camp in Rwanda ever since. Life in the camp, he explained, is tough, so a year and a half ago he made the two-day bus journey through Uganda to Nairobi. His uncle helped him find a place to live in Umoja and he soon found a job as a barber, a common occupation for those without a Kenyan ID. He explained that he is saving money to buy a passport and study abroad. With just a modest income and the high cost of living in Nairobi, it is likely to be a challenge. ‘Anytime you can lose your job, and you would have to leave your house’, he said. Despite the challenges of getting by in Nairobi, he has no interest in returning to Rwanda.

Over the course of the next few of weeks, I returned to Umoja several times to meet with Patrick and his friends, colleagues and neighbours to learn more about this particular community in this particular part of Nairobi. Despite their unique experiences, the people I spoke to share a common search for a safe place to call home.

Forced from the DRC by war and insecurity, they have travelled several days, sometimes with long stays in other cities or refugee camps, before arriving in Nairobi. Through pre-existing and newly developed networks, they have found creative ways to navigate the bureaucracy of refugee affairs, working within a restrictive system in pursuit of a better life. Migration policies that ignore the agency of these individuals and that are not informed by the realities and experiences of the migrants themselves, and by an understanding of the decisions they face and make, risk being unsustainable or exacerbating a particular problem.

In documenting the experiences of migration, the research focused on three stages: pre-migration and the motivations for migrating; the physical migration, including the pull factors to Nairobi; and the settlement experience, including expectations and reality, and longer-term goals. The next two parts will delve into these themes, exploring the drivers and dynamics of Congolese migration to Nairobi and the refugee affairs system that is often stacked against the free movement of people.