On 5 July 2019, the Rift Valley Forum launched the book, Widow Inheritance and Contested Citizenship in Kenya, by Dr. Awino Okech. The book explores the intersection between power, gender and sexuality, and the role of body politics in the construction of gendered subjects and nations. The book uses widow inheritance amongst the Luo of Kenya as a case study and unpacks how ‘respectable femininities’ and ‘wayward sexualities’ become the ‘sites’ from which national and state politics are ritualized and where tensions resulting from non-hegemonic performances of both gender and sexuality are ‘resolved’.

The lively discussion challenged the public to rethink and reimagine alternate democratizations in better societies with freedoms that uphold the rights, access and mobility of women at a familial, communal and national level.

In Luo culture, the customary practice of widow inheritance, or wife inheritance, requires a widow to be inherited by the deceased male brothers or close relatives. An inheritor’s assumed responsibilities are to provide financial and social support, and paternal care to the children. The Luo traditional power structure dictates a woman’s status in a household, homestead, clan and community. Originally, a woman’s power was limited to household management, whereas a man flexed his power, from heading the homestead to managing clan affairs. 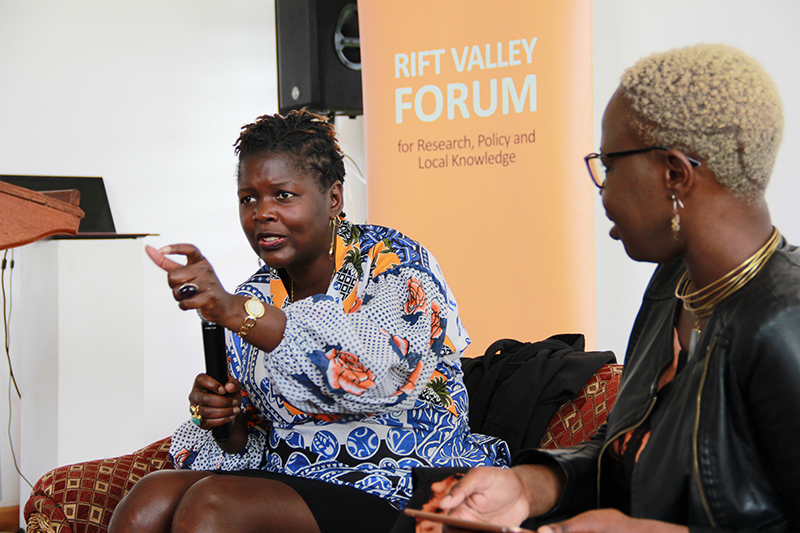 Consequently, through acts of marriage, a woman shoulders multiple identities that are considered ever-binding culturally. She is perceived to be a wife of a household, homestead and clan. Following the death of her husband, it was assumed to be the clan’s responsibility to provide a proxy husband.

The dominative cultural practices reflect the biased nature of gender relations in statebuilding processes in Kenya. In the private arena, family politics dictate the way in which a woman is framed discriminately in marriage, over her sexuality and fertility, and in her home. The role of women is largely crafted around the attainment of heterosexual family ties and reproduction.

Dr. Okech linked debates on statebuilding and cohesion to the control of women’s bodily autonomy and integrity. Feminist scholars define body politics as using the body as an entry point for political engagement. Political discourses use ethnicity and identity as tools to mobilize the masses where the mobilization of women is based on the ability to sustain communities with or without their choice.

Her Agency in Widow Inheritance

Past and current literature and debates surrounding widow inheritance operate on particular binaries such as the HIV epidemic, cultural justification, and perspective on modernity and tradition. In Dr. Okech's view, these specific binaries labelled women as disempowered or empowered, and often the disempowered were non-urban women because of their lower education level and economic mobility compared to urban women.

Interestingly, the book documents a different reality of women in villages who are assumed to be disadvantaged and traditional for conforming to widow inheritance practices. From the narrations given, Dr. Okech noted that these women understand masculinity as a symbol of gaining access to economic and social mobility.

The symbolic nature lay in exercising power in public spaces. The presence of an inheritor or jater by no means brought an economic contribution. Instead, it was an opportunity for women to negotiate and progress in their lives. These women’s experiences illustrate the possibility of maintaining the status quo while also exercising agency. Dr. Okech reminded the audience that agency was negotiated in multiple ways by women: making choices about who inherits them, the duration of relationship and how to continue with their sexual lives after a husband’s death.

Dr. Okech expressed the idea of respectable femininities and wayward sexualities as routes used by women to subvert the control and surveillance of their sexual autonomy. The shifting gendered power relations frustrated the men.

Men who were understood to be actors now became observers, which is internalized as the loss power. Yet, the changing performances of masculinities in this context are framed by poverty constraints, and for women, they are constructed as ‘out of control’. Several audience members reiterated the wayward narratives surrounding ‘slay queens’ and older women, by giving examples of the departed Wambui Mbugua and Sharon Otieno as problematic.

Dr. Okech noted that narratives of wayward femininities are used as cautionary tales to mobilize ethnic communities to draw national borders and boundaries on statebuilding and cohesion processes. Her book terms contested citizenship as a multimedia construct. Women are seen to negotiate their rights and entitlement, from the level of the family up to the state.

Dr. Okech challenged the audience to imagine new ways of freedom by reflecting on key moments of history and rebuilding new leases of societies that serve to equalize communities. In this course, she also advised against taking the past as indicative of the perfect model of where our destinies lie. In other words, this is an opportunity to rethink and rebuild futures that take into account the gendered conditions created by the division between public and private spheres. Such futures, she noted, are sustainable with individual and collaborative efforts and are available in small communities and organizations.

Documentation and recognition of Africa’s histories are critical and valuable processes in framing imagination. Dr. Okech emphasized the need to prevent the erasure, alteration and duplication of our history, knowledge and experiences in today’s social justice movements. The purpose of linking the past and present is to draw societal introspection and imagination of different and better societies.

She also challenged men to unseat their privilege by rescripting masculinities in their lives, communities and nations. This means to interrogate the men in their environment who speak misogyny that underpins violence against women and girls.