Skip to main content
South Sudan's Archival Project: Communicating the Past through the Lens of a Cartoonist|Home 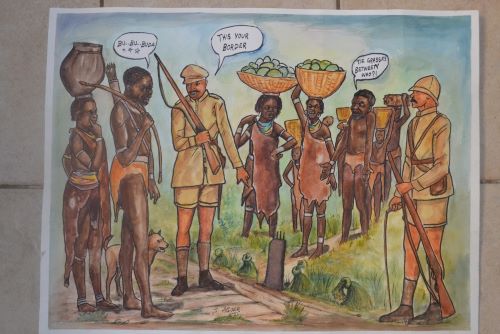 The South Sudan National Archive Project is a multiphase project for the conservation, reordering, cataloguing and digitization of the historical government records of South Sudan. The project has been designed to safeguard the contents of the archive and to make them more widely accessible to the general public in South Sudan and beyond. The documents in the archive number tens of thousands and date from the colonial era up to the 1980s. They cover political, social and administrative issues at local and regional level over a period of eighty years.

In collaboration with the Ministry of Culture, Youth and Sports now the Ministry of Culture, Museums and National Heritage together with UNESCO in South Sudan and with the financial backing of various donors, -mainly from the Norwegian Government- much work has been done to complete a modernized sorting and cataloguing of the records through digitization.  So far, close to 60% of the archives have been digitized.

To create an awareness about the South Sudan National archives and to encourage people to visit and make use of it, an outreach programme was developed to that effect. These included, public exhibitions, school visits, social media exhibition, university studies and radio shows. Knowing that the National Archives is the only documented historical evidence of South Sudan’s past government engagement with political, social and economic issues on various levels, the outreach program in general and the school and university outreach programme in particular were designed with the view to facilitate learners’ engagement with the country’s history.

In this blog, the Rift Valley Institute South Sudan office is pleased to share a sample of this project; a cartoon booklet inspired by documents and topics developed from the South Sudan National Archives, illustrated by James Aguer with text from Nicki Kindersley. The booklet is part of the outreach component of the project which seeks to introduce and explain the history of the South Sudan National Archives and an appreciation of the use of its content within the curriculum in schools, universities and by researchers and the public in creative and artistic ways.

The booklet espouses ten illustrations and accompanying texts on: King Gbudwe (the last King of the Azande Kingdom), slavery, international and local boundaries, herd tax, religion, medicine, immigration and emigration and blood compensation, all important issues at the heart of South Sudan's politics over the last century. The illustrations are in themselves informative and say a lot about the history of South Sudan and how it informs its present realities.

The topics presented in this booklet make only a sample of over a hundred topics covered in the archives. They were chosen to highlight their significance in relation to the history, educational curriculum and popular discourse in the country. To enrich social studies, additional work is needed to review the archives so that reference can be made to documents that talk about issues such as kingship, slavery, boundaries, herd tax and religion among others.

As a research entity, the Rift Valley Institute has over the years strived to create linkages between its research projects and public policy and practice, in this case to include resources from the archives in the outputs of other reports. For example, the South Sudan Customary Authorities project drew extensively on the South Sudan National Archives to highlight the historical past of customary and traditional leadership in the country while continuing to gauge its continuing effect in shaping current political affairs in country. Consider for example how the cartoons booklet briefly captures information about King Gbudwe (also Gbudue), the last king of the Azande Kingdom, in the meantime, the Azande have on the 9th February 2022 restored their Kingdom and installed Atoroba Peni Rikito Gbudwe, the great grandson of King Gbudwe as the new king.

Some of the other key topics captured in the booklet are also of great significance to the contemporary discourse on South Sudan. Ten years after its independence, the question of boundaries both local and international remain controversial and as such causing conflict with a consequence of loss in life and property. Issues around allusivity of justice brings forth the theme of blood compensation.  Herd tax, religion, medicine, immigration and migration all remains crucial and relevant to the realities of the day. 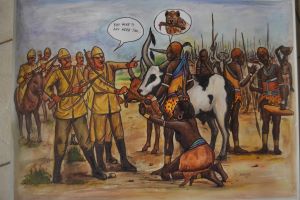 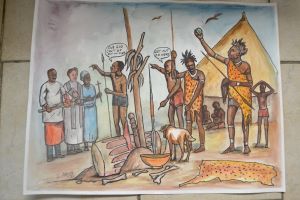 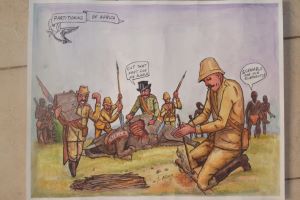 To conclude, the intention of the cartoon booklet much as the other components of the outreach program of the South Sudan National Archives project is to enlighten people about the importance of the archives as a historical resource available for use to guide research, policy and practice to further advance development in South Sudan. A review of the archive material and the booklet produced from it helps us recognize that current challenges to state-building, service delivery, justice, border enforcement, immigration and emigration etc… that South Sudan faces today are not new. The institutional knowledge of South Sudan that is availed to the public and experts through the archives can guide effective problem solving away from the usual tendency to reinvent the wheel.

You can physically visit the South Sudan National Archives in Juba and scroll through the documents that inspired this booklet and to find more about provincial, districts, rural councils and Southern Regional Government’s records to enrich your knowledge of South Sudan.

Has worked with the Rift Valley Institute since 2017 as a consultant, a researcher and a staff. He is currently a Project Coordinator for the South Sudan National Archives Project and also support other projects within the institute. Alex Miskin studied Sociology and Social Anthropology at the University of Juba.