Decolonizing Knowledge in Africa: Reflections on the RVI Research Communities of Practice Project

Decolonizing Knowledge in Africa: Reflections on the RVI Research Communities of Practice Project 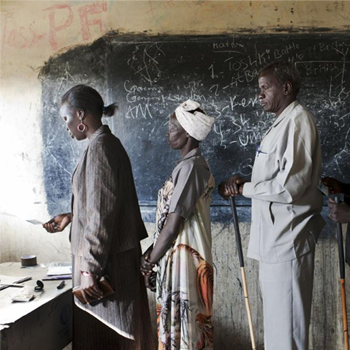 Historically the production of knowledge reflects a history of unequal power relations and the economic domination of the Global South by the Global North. Africa sits at the centre of this inequality. Accordingly, the production of knowledge on African affairs has largely been centred in the scholarship and institutions of the Global North. Part of the problem lies in the fact that most postcolonial African countries, especially in countries of the Horn and Great Lakes regions, are still at a nascent stage of developing their research capacities.

It is against this background that RVI’s Research Communities of Practice Project, funded by the Carnegie Corporation of New York (CCNY) conceptualises its support for African peace-building research and research communities of practice in the DR Congo, the greater Somali Region and the Sudans.  Over the next two years, the project will develop the capacity of early career African researchers in the three regions to conduct and disseminate research, link them up with mentors in their specific areas of focus and host communities of practice which shall constitute knowledge sharing platforms where scholars, practitioners and policy makers can engage in open discourses on matters of peace, security and development.  The project will also award small grants to the trainees to undertake research in and on their countries and disseminate the same through journals, blogs and other (decolonised) knowledge sharing platforms.

As the incoming Project Manager, I’m excited about this project for a number of reasons. First, it raises the profile of African researchers in the global information landscape. Having studied in Kenya, the Netherlands and the UK, I am alert to the various ways in which information asymmetry affects both the quality of research and the overall outlook of global and regional intellectual discourse, not only in the social sciences but across various knowledge strands. Decolonization of knowledge thus builds on the successes already registered in the arena of political decolonization .

Decolonization of knowledge is important for several reasons. First, it enables African researchers to design their research and knowledge production schemes in ways that are responsive to local social, economic, and cultural realities; secondly, it raises the visibility and credibility of the knowledge that is produced in the continent; thirdly, it enables African scholars to carry out research on, and provide local solutions to, local problems; and lastly, it increases African agency in the global knowledge production and consumption spheres, thus elevating African agency in international development circles where researches are used to design and implement  global development programmes.

From object to agents of knowledge

To understand how exactly the project contributes to RVI’s strategy of decolonizing knowledge, it may be important to first map out the province of knowledge decolonization. Decolonization of knowledge is anchored on at least five strands: A rejection of the presumed neutrality of knowledge; the deconstruction of what is considered as ‘true knowledge’; the  diversification of the producers of this knowledge by, for instance, increasing the voices of scholars from the Global South and repositioning the Global South (in our case the Horn of Africa and the Great Lakes Region) not as objects for research but also as agents of the same; by re-examining and reorienting the language of knowledge production and consumption; and lastly by exploring new platforms and spaces for knowledge production and dissemination.

The project achieves these five objectives in different ways that are interlinked. First, by training early career African researchers, the project addresses existing capacity deficits that continue to justify the control of knowledge production systems by the Global North. Investing in local capacity will help redress the current situation where much peace and security related research in the Horn of Africa and Great Lakes regions is largely controlled by foreign academics (from the Global North and from other more advanced economies in the African region), which ends up excluding local voices from discourses on peace and security in their countries. It is important to clarify that although Africa is generally marginalised within the global knowledge economy, the Horn of Africa and Great Lakes countries are also marginalised within the intra-African knowledge production system. They therefore suffer double marginalization and a project that seeks to raise the voices and visibility of researchers in these countries—such as this one—is not only counter-hegemonic, but also timely.

The fact that the project embraces an intersectional gender perspective in recruiting early career scholars takes this conversation further by ensuring that women, and especially young women who are often excluded from research in the targeted regions, are included in the knowledge economy, facilitating their valuable contribution to peace and security in the targeted countries. This way, the project will support their empowerment and challenge underlying gender stereotypes about the role of women in peacebuilding, security and knowledge generation. The construction of the mentor-mentee relationship in the project, not as a unidirectional arrangement where knowledge flows from the mentor to the mentee, but as a platform for mutual learning, is a further reflection of the decolonial agenda of the project.

Finally, to advance humanity rather than just advance knowledge itself, the decolonization project needs to become expansive and transcend boundaries so that knowledge is more accessible and dynamic. In this respect, this project aims to continue with RVI’s strategy of  stretching the boundaries of knowledge access first by including publication in various forms within its outputs, such as  in accessible journal or blogs. Although global efforts are being made to enhance access to knowledge, African voices in research matters are still minimal in the knowledge spaces first due to global economic inequality which determines access to research and publication funds and secondly, due to a history of marginalization and exclusion entrenched by colonial education systems which did not prioritize African scholarship.

As we start the implementation of this project, I am optimistic that by the end of the two years we shall have raised the profile and visibility of early career researchers in the greater Somali region, South Sudan and DR Congo. Ultimately we hope to make a significant contribution to the decolonization of knowledge in and on the Horn of Africa and Great Lakes region.

Dr. David Otieno Ngira is the Research Training Manager and coordinator of the Research Communities of Practice Project at the Rift Valley Institute.  David holds a PhD in Human rights Law from Utrecht University in the Netherlands, a Masters degree in International Development Law from Warwick University, and was a Postdoctoral Research Associate at Cardiff University. He has extensive experience in civil society and academia, and has taught at Mount Kenya University.