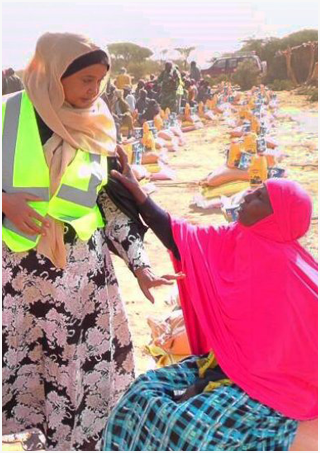 This article was written by Abdirahman Edle Ali, Ahmed M. Musa, Mohamed Aden Hassan, Nauja Kleist and Mark Bradbury. The authors are part of the Diaspora Humanitarianism in Complex Crises (D-Hum) research programme, a consortium made up of the Danish Institute for International Studies, Institute for Development Studies at the University of Nairobi, Rako Research and Communication Centre and Rift Valley Institute. This article was originally published on the Danish Institute for International Studies website.

The world is struggling to respond to the coronavirus as COVID-19 transmission proceeds to escalate. Only few cases have been recorded in the Somali region so far but, due to absent and inadequate health services, there is fear that the pandemic may hit extremely hard. The chairman of the Somali Medical Association in Mogadishu, Mohamed Mohamud Ali, told Aljazeera that the death toll in Somalia could be unimaginable, with the risk of more people dying in Somalia than anywhere in the world. In the self-declared but internationally unrecognized Republic of Somaliland, Dr Edna Aden, founder of Edna Adan Hospital and former Minister of Foreign Affairs, recently issued an international humanitarian medical appeal for support, describing Somaliland as “helpless in the face of a medical emergency of this magnitude”.

The backdrop of these vulnerabilities is a long history of civil war, insecurity, poverty, and natural disasters. Civil war from 1988 and the collapse of the state in 1991 led to famine and mass displacement within Somalia, to the neighbouring countries and further afield. Chronic insecurity linked to the rise of the extremist Al Shabaab in the mid 2000s and recurrent natural disasters have resulted in Somalia being consistently ranked as one of most fragile states in the world.

Between 1991 and 2011, there were an estimated 1.5 million fatalities due to war and insecurity. While the country has come a long way since the war in the 1990s, today more 2.6 million people are displaced and some five million Somalis are reported by the UN to be in need of humanitarian assistance.

According to the UN’s global humanitarian response plan, Somalia has an average of two health workers per 100,000 persons, compared to the global standard of 25 per 100,000. Indeed, the UN has ranked Somalia as one of the most vulnerable countries at risk of food insecurity and pandemics. Let us now have a look at how Mogadishu and Hargeisa, two major cities in the region, seek to prevent the crisis.

The first COVID-19 case was registered in Mogadishu on March 16, causing the Federal Government to suspend all international flights. Domestic flights have since temporally been banned though the government cannot control the movement of people and goods within the country by road. Likewise, the government sought to ban the import of khat - the mild narcotic leaf widely chewed in the Horn of Africa - because it is consumed in social settings.

As stated by Minister of Health and Social Care, Dr Fowzia Abikar Nur, in a Somali Voice of America interview, the Federal Government does not have capacity to test the virus inside Somalia but uses a WHO certified laboratory in Kenya.

Dr Nur further acknowledged receipt of medical equipment from Chinese business magnate Jack Ma and his Alibaba foundation, consisting of laboratory diagnostic kits, infection prevention and control commodities. The donation was part of the 1.1 million testing kits, 6 million masks and 60,000 protective suits donated by Jack Ma that reached Ethiopia on March 22 to be distributed to all Africa countries. Somalia received its first dispatch on March 24, and on March 27, Prime Minister Hassan Ali Khaire tweeted that he had distributed preventive equipment to the Somaliland and Puntland administrations, with plans to further distribute equipment to the federal states of Hirshabelle, Southwest, Jubaland and Galmudug.

Hargeisa: quarantines and reallocation of the development budget

In Somaliland, two cases were confirmed on March 31st, but the country has been bracing itself for about two weeks. An inter-ministerial preparedness committee for Covid-19 was established by president Muse Bihi Abdi in the middle of March. On March 25th, the committee ordered that all passengers of flights entering Somaliland be quarantined for 14 days, the closure of Somaliland borders with Ethiopia, Djibouti and Somalia for three weeks and that all non-essential civil servants should work from home. On the same day, all the passengers of the Ethiopian Airlines flight from Addis Ababa were confronted with the new measures and placed in a mandatory 14 days quarantine, at their own expense.

At a government executive meeting the following day, it was further decided to suspend all development projects in Somaliland’s 2020 budget, reallocating the development budget to the fight against the coronavirus. In addition, the government announced it will buy locally produced crops from farmers in order to create a national food reserve while the government exempted imported coronavirus medical equipment and medicines from taxes.

So far, the only Covid-19 aid that has reached Somaliland is the preventive equipment from China via Mogadishu. A fair guess is thus that Somalis in the Horn of Africa will turn to the globally dispersed diaspora groups for more support.

Somali diaspora groups constitute a lifeline for Somali populations in times of crisis. Remittances are and have been crucial for Somali families to survive the long process of post-conflict recovery, poverty and humanitarian emergencies. These may be in response to what we could call generalized crisis – affecting the entire Somali peninsula, such as the 2011 drought – or site-specific crisis, such as flooding or terrorist attacks.

Whilst the largest proportion of remittances from the diaspora are transfers to Somali families, many diaspora groups have organised themselves across the world to contribute to humanitarian relief in times of crisis. This was well illustrated in the 2011 famine and the response to the Zoobe bombing in Mogadishu in 2018. In such instances global or local fundraising events raise donations from private companies and wealthy individuals, from within and outside the Horn of Africa. Compared to the past, diaspora humanitarianism has been made more feasible by the rapid expansion of mobile phones in Somalia, which not only facilitates communication but supports systems of mobile money transfer which are among the most efficient and cheapest in the world.

COVID-19 is different, however, as this is a global crisis that will affect both the diaspora and the Somali region. While calls for diaspora engagement flourish on the social media, there are also pleas for Somali diaspora to stay away to avoid further transmission and worrying reports about the high proportion of Somalis amongst COVID-19 fatalities in Stockholm, Sweden. Finally, we see concerns for the future of remittances to the Somali region if Somali diaspora groups are hit hard by COVID-19 themselves, losing employment and other income sources. If this happens, this crucial Somali diaspora lifeline may hang by a thread, with dire health and economic consequences.